KIR ROYALE - History and Recipe of a Classic Cocktail 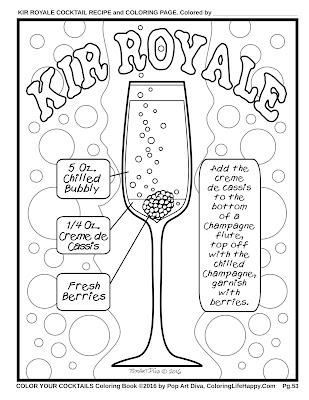 This Recipe featured in
COLOR YOUR COCKTAILS COLORING BOOK.

DIRECTIONS
Into a chilled Champagne flute add the Creme de Cassis, top off with Chilled Champagne and garnish with frozen or fresh black currants and an optional lemon twist.

HISTORY
The Kir Royale is a champagne version of a cocktail called Blanc-Cassis, a white wine and blackcurrant liqueur cocktail. The classic version Kir Royale is simply champagne with a splash of Creme de Cassis, a black current liqueur, though there are now many variations out there for the adventurous palate. I've often done this with Chambord in place of the Creme de Cassis.

Some recipes call for 4 parts champagne to 1 part Creme de Cassis though the original recipe calls for simply a splash of the Cassis.

Canon Felix Kir, mayor of Dijon in Burgundy France from 1945 to 1965 is often credited as the creator of the Kir Royale, it's said Kir used the Creme de Cassis to sweeten the local low quality war time wines to make them more palatable thus "inventing" the combination of wine and cassis or "un kir". However, a wine based version, a blanc-cassis, was already in existence and called Vin blanc cassis de Dijon by Lejay-Legoute.

In a way Canon Kir did create the "Kir Royale" because it was named after him! During his tenure as mayor, Kir served the drink up as a promotion of the local region to visiting guests. As a result of this and his war efforts in the French Resistance, Kir was honored by Lejay-Legoute when they named their premixed black currant liqueur "un kir" (the original name of Creme de Cassis) after him. When champagne was used instead of wine it became a "Kir Royale".

Now you can enjoy your Kir Royale and share a little history too!
PLEASE DRINK RESPONSIBLY & DRIVE RESPONSIBLY
Updated 11-2016
Posted by Pop Art Diva Enterprises at 6:59 AM