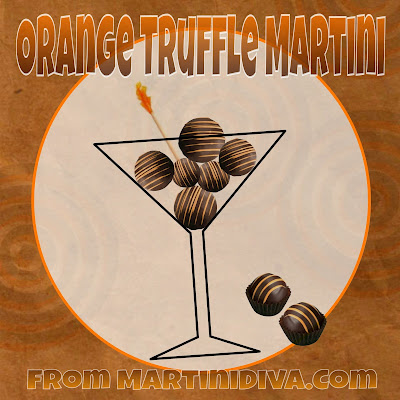 Some years ago I had a friend over who was in love with those chocolate dipped orange sticks. I never went to his house that there weren't some of them out in candy dishes strategically placed near where he sat.  He used to buy them at Trader Joe's so I went out to get some and found that they also had raspberry ones. I bought those instead, he still argues with me to this day about which is better.

To shut him up so he'd leave me and my TJs chocolate raspberry sticks alone, I created this cocktail for him. Turned out to be a freaking great cocktail which tastes exactly like a chocolate covered orange truffle and one that I do often. Much better than his jellied orange sticks.

GLASS: Cocktail (martini) glass or coupe
DIRECTIONS:
Dip the rim of the glass in some of the orange liqueur then into the chocolate shavings. Chill the glass in the freezer while you make your cocktail.
Fill a cocktail shaker with ice then add the orange vodka, white crème de cacao, orange liqueur and the half and half and shake until well chilled.
Pour into your cocktail glass and garnish with the chocolate dipped orange slice.

For this cocktail, of course, I'm referring to the chocolate truffle, a confection of a soft chocolate ganache rolled in a dusting of cocoa powder or dipped in chocolate, but this is not the only truffle that's edible out there.  In fact, today's chocolate truffle is actually a dessert homage to an edible fungus that is highly prized in gourmet cuisine.

Truffles are actually the fruiting body of an underground mushroom that grows near the roots of various trees.  Wild truffles of the Tuber genus have been considered the "diamond of the kitchen" by chefs and gourmets for centuries for their deep, earthy flavor and smell.  There are references to the use of truffles in cuisine as far back as the fourth century B.C. and there are mentions of truffles in Roman cooking as well.

Pigs and even some dogs were trained to hunt out these difficult to find delicacies and, until the 1800s, it was only these wild truffles that were available, making this delicacy a very expensive addition to the table. The record price for wild truffles was $330,000 US a kilogram in 2010. These days truffles are being grown commercially, helping to bring the cost down, but the wild truffles are still the gold standard for most gourmands and chefs.

As for the chocolate truffle, whether created by M. Dufour in Chambéry, France in December 1895 or by the famous chef Auguste Escoffier in the 1920s, it was obviously named after the fungal truffle because the dusting of cocoa powder used to set the soft chocolate ganache truffle gave it the earthy appearance of a the coveted wild truffle.