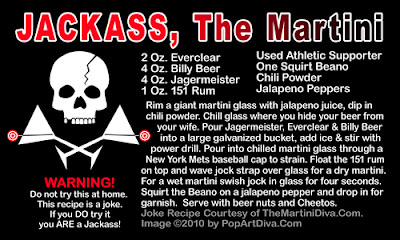 I wonder why there is a day to celebrate jackasses. Seriously, are you going to celebrate the fact that you have to deal with jackasses?  No, me either.  So I prefer to look at National Jackass Day as National Jackass Therapy Day - this is the day you get to toast yourself for having to put up with all the jackasses that pop up in your life!

Now, this martini is not for you good folk who have had to put up with the jackasses - you need to treat yourself to one of my other cocktails. No, THIS martini is for the jackasses themselves - after you read it you'll understand why.

Yes, the recipe is a joke . . . . but putting up with jackasses isn't a joke, so if you have had to deal with one lately (or ever) today is your National Jackass Therapy Day.  Shake up one of my non-joke martinis and spend Happy Hour telling stories about the biggest jackasses you've ever encountered.

You can actually make this cocktail, minus the jockstrap and probably the Beano, but, really, who'd want to?

JACKASS, THE MARTINI
is Available for Licensing
and is
Can be purchased on
on Posters, T-shirts & Tops, Shoes, Cards, Business & Personal Stationary, iPad/iPhone Cases, Ornaments, Aprons & More: 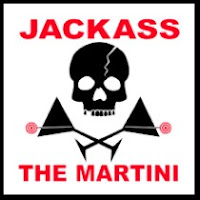 Posted by Pop Art Diva Enterprises at 8:23 AM