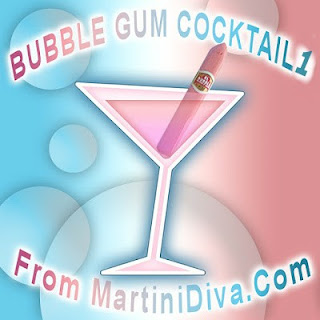 I was asked by a friend who was having a baby to create a signature cocktail for her baby shower. She was including men at her celebration and wanted something that would work for both men and women. The first thing that popped into my mind were the bubble gum cigars that came in both pink and blue colors. This worked out well because she and her husband didn't know, and didn't want to know, the sex of their baby until it's birth.

Trying to reproduce the bubble gum flavor, I created a peach schnapps and vodka cocktail that could be colored pink or blue and we garnished them with matching bubble gum cigars. The drinks were a hit and she later told me that several of her friends asked for the recipe and copied the idea for their baby showers.

Sometime after, Three Olives vodka came out with a bubble gum flavored vodka called Bubble and I revisited the recipe for a second version.

You can find both
BUBBLE GUM COCKTAILS HERE

Posted by Pop Art Diva Enterprises at 10:52 AM