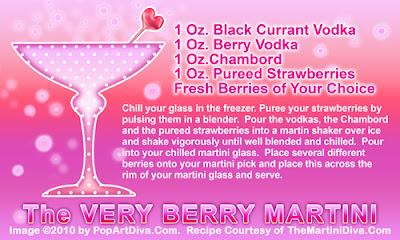 The
VERY BERRY MARTINI
& a little trick to taste test before you buy a new liquor!

Black Currant Vodka is one of the more unusual infused vodkas out there and I tried several brands before I settled on Absolut Kurant as my choice for my bar. The other brand was more like a black currant liqueur because they infused the vodka with blackcurrant juice and not the berries and I occasionally use it for a little splash of sweetness and that rich blackcurrant fruitiness.  The last bottle I got stuck with was a raving dud which tasted like cough syrup gone bad and ended up going down the drain while I cleaned the bottle to use for infusions!

Despite what the ads might tell you, not every bottle of alcohol is drinkable and I've gotten stuck with a enough swill over the years that I have developed a sneaky little trick to try out a new booze before I buy a whole bottle of something that can't be saved by any means of mixology magic.

This is my little taste testing secret:  I go to a local, upscale, hip drinking establishment where they stock all assortment of exotic and quixotic alcohol and order one shot in a snifter.  This allows me to experience the nose and the taste unadulterated by any mixes and undiluted by ice and it's a boon to my booze budget as well!  I'll slowly sip the shot, roll it around in my mouth and make note of back tastes, the burn and the texture and I can even see the "legs" as the liquor slides back down the glass.

As a mixology hobbyist this method has saved me a ton of money I would have wasted on a bottle of a bad liquor while I also gather great information from the professionals behind the bar. I've gotten to the point that I will stop in a few of my favorite drinking establishments and see what's new in their bar and catch up on some cocktail gossip while I'm at it.

If I owned a bar I would definitely have a Tasting Night at least once a month!