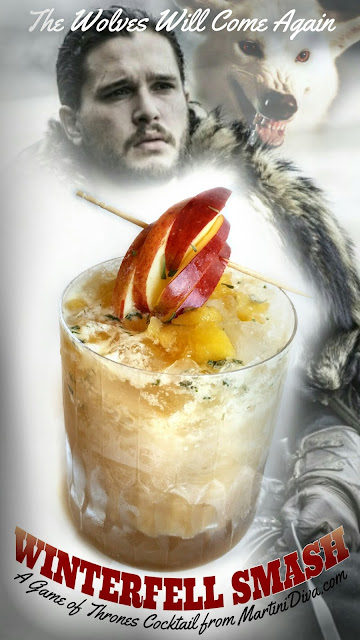 “We’ve been flaying our enemies for a thousand years. The flayed man is on our banners!”
~ Ramsey Bolton

The battle for Winterfell begins with the "Battle of the Bastards" episode this Sunday. When you have a battle in the Land of Ice and Fire, where the weapons are pretty much up close and personal, there's going to be a lot of smashing going on so I thought a smash style cocktail would be fairly appropriate. (If you're not too sure what a smash style cocktail, buy my book The Zen of Cocktails, you'll find the definition in the Categories Schmategories chapter.)

I also like the idea of a Smash cocktail because I dearly want to see Jon Snow and his Wildling army defeat and smash the living hell out of Ramsay Bolton. It's time for one less bastard in Westeros ... and it had better be Ramsey. 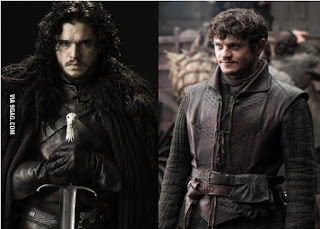 Since this is for Winterfell I decided that, despite it being summer, a more winter-ish fruit and herb would be appropriate for this cocktail. However, since it is summer, it also had to be cool and refreshing which a Smash, with its mound of crushed ice, definitely is. 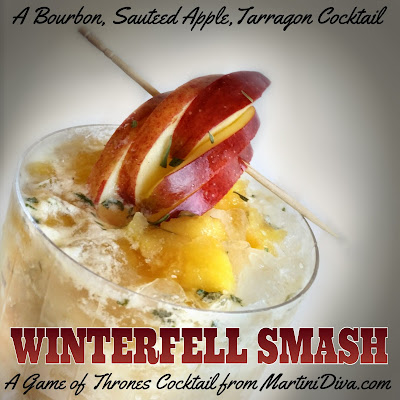 DIRECTIONS:
Muddle the sauteed apples, apple tarragon butter syrup and tarragon vinegar in the bottom of the cocktail shaker.
Add the ice cubes to your cocktail shaker, pour in the bourbon and shake until chilled.
Pour into a chilled old fashioned glass, pile in the crushed ice, top off with a splash of soda.
Add your apple garnish, a few extra sauteed apples, a dusting of some dried tarragon leaves and serve.

For each cocktail saute half a cubed red delicious apple in 1 tablespoon of butter, 2 tablespoons of brown sugar, a splash of bourbon and 1/2 teaspoon of dried tarragon. Cook on medium until the apples are softened and the sauce has reached a syrup consistency. Cool to room temperature before adding to your cocktail.

“My father told me big men fall just as quick as little ones, if you put a sword through their hearts.”
~ Jon Snow

The HISTORY of the MARTINI 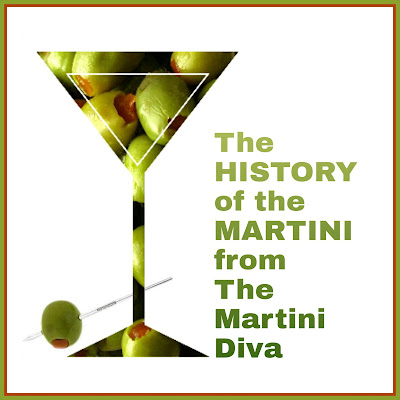 HISTORY OF THE MARTINI
There is an aura of mystery that surrounds the birth of the Martini. I suppose that is fitting for a drink that has become associated with the likes of James Bond, movie spy extraordinaire, as well as other notables such as Frank Sinatra, Ernest Hemingway, F. Scott Fitzgerald, Alfred Hitchcock, Franklin Delano Roosevelt, and Winston Churchill.

Some say the martini originated in a saloon in the late 1800's in Martinez, California. There is a "Martinez" recipe in a bartending book from 1887 (The Bon Vivant's Companion by Jerry Thomas - but with a Maraschino cherry instead of an olive and a dash of orange bitters instead of a lemon twist. Some claim the name "martini" came from the Martini and Henry rifle used by the British army in the late 1800s - supposedly because both had "a strong kick". The first official mention of the word Martini appears in the New and Improved Illustrated Bartending Manual in 1888.

The martini was considered THE cocktail in the days of Prohibition - probably because of the "bathtub gin" of the era. It gained great popularity and élan during the days of the "Rat Pack" and fell into oblivion during the health conscious days of the 70s and 80s. The resurgence of the martini in today's chi chi bistros is due in part to the return of glamour and sophistication and the development of "designer" martinis that have little in common with the original drink. 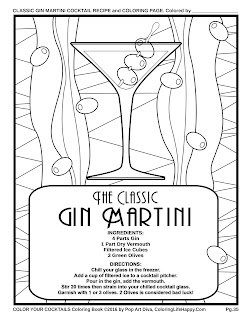 EVOLUTION OF THE MARTINI

Possibly the first true modern martini was concocted around 1911 at the Knickerbocker Hotel of New York by Martini de Arma di Taggia, who was head bartender at the time. He combined 1 part London Gin, 1 part Noilly Prat Vermouth and orange bitters, chilled over ice and then strained into a chilled glass. No one is really sure where today's popular olive garnish came from - I like to think it was a hungry customer who decided to grab an olive or two and tossed one in the mouth and one in the drink for later - but with those orange bitters in the recipe above I'd garnish that with some kind of citrus.

Often referred to as the "Silver Bullet" (because of this quote by William Emerson, Jr.: "and when that first martini hits the liver like a silver bullet, there is a sigh of contentment that can be heard in Dubuque"), the current recipe for a classic martini is five parts gin to one part vermouth. A Dry Martin reduces the vermouth, depending on the taste preferences, from just a splash to simply coating the inside of the glass. It is said the Winston Churchill's idea of a dry martini was to look at the bottle of vermouth from across the room! The Classic Martini is most often served with an olive as garnish, but the vintage version is served with a twist of lemon rind.

Current tastes prefer vodka instead of gin, though purists claim this is not a classic martini but a Vodkatini or a Kangaroo. In most upscale cocktail lounges these days you will find what I call "designer martinis" in a variety of recipes from the ground breaking Appletini to the downright decadence of dessert martinis like my Chocolate Martini. For the glamorati of today if you serve it in a martini glass it's a martini. Fine by me, because it was the elegant and sophisticated martini glass that really began my own martini obsession. 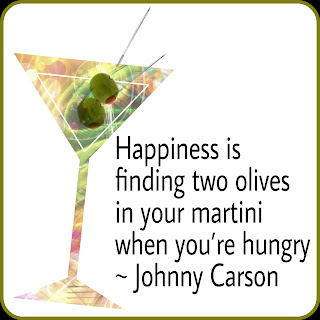 "Shaken, Not Stirred", the movie version of 007's supposedly favorite way to have his martini mixed, would not give you a classic "Martini" but a "Bradford" where a cocktail of gin and vermouth is shaken then poured into a martini glass not strained so that small shards of ice float in it.

Though this oft repeated pop culture phrase has been the culprit of many a badly abused classic martini, it is not through any fault of the impeccable Mr. Bond, James Bond. In the books our favorite spy is actually ordering a "Vesper" (named after a Bond Girl) and not a martini.

Shaking the martini as opposed to stirring is said to "bruise" the gin, thereby sharpening it's taste and many argue this dulls the taste of the vermouth - possibly another way to create a "dry" martini.  Either way, a Gin Martini is best stirred, not shaken and a Vodka Martini is best shaken, strained and served ice cold - like revenge.

For you health nuts, here's an interesting fact: A shaken martini is more healthy for you. Evidently, shaking the martini produces significantly higher antioxidant properties than a stirred one. 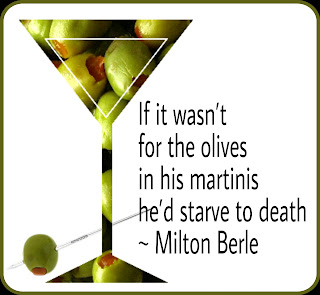 National Martini Day is June 17th.
The History of the Martini Glass
My recipe for
THE GIN MARTINI 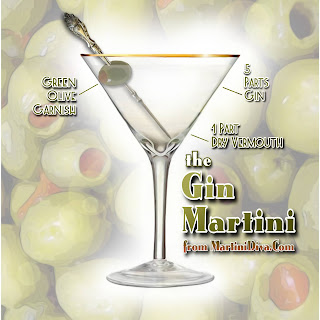 Posted by Pop Art Diva Enterprises at 11:43 AM