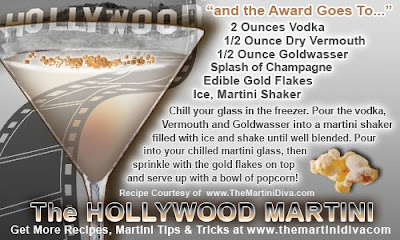 It's that time of year again - time for the Academy Awards! Last year my Academy Award Martinis were so popular I've decided to post them again.

Today is The Hollywood Martini - a tip of the martini glass to the film classics of Hollywood past, this classic martini recipe comes with a plot twist of Goldwasser and edible gold flakes!

I'm really looking forward to Steve Martin and Alec Baldwin as the hosts of this year's Oscars. I've gotten to really enjoy Baldwin's new comedic acting turn (especially on 30 Rock & in It's Complicated). Baldwin's no stranger to the Oscars, having been nominated for an Academy Award in 2003 for his supporting role in “The Cooler.” Martin is one of my all time favorite actors from way back and he has hosted twice before so he's a veteran. Did you know he plays in a bluegrass band called the Steep Canyon Rangers? I expect we might get a Steve Martin banjo segment this Sunday, don't you?

So, who do you think is going to win Best Actor and Best Actress? And who will they award Best Picture to? Or, better yet who would you WANT to see win and why?

CONTACT ME TO BECOME A SPONSOR OF THE MARTINI DIVA!
PLEASE DRINK RESPONSIBLY & DRIVE RESPONSIBLY