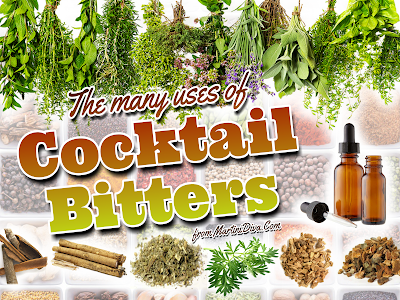 THE MANY USES OF COCKTAIL BITTERS
Outside of the Bar
You've probably seen a bottle in bars, that ubiquitous, mysterious potion the bartender has close at hand to dash a few drops in certain cocktails like Manhattans, Old Fashioneds, Americanos or Sazeracs. Maybe you've even had a few drops on a slice of lime the bartender gave you when you got the hiccups.  (My very first experience with bitters.) One thing's for sure, if you drink any cocktails at all you will have had bitters at one time or another.

Bitters are defined as a "liquor that is flavored with the sharp pungent taste of plant extracts and is used as an additive in cocktails or as a medicinal substance to promote appetite or digestion." (Bitters are also employed in cocktails via drinkable bitter liqueurs called Amari or Amaro, but for today we'll stick with those tiny little bottles of boozy flavor bombs, most often dispensed via an eye dropper.) The plant extracts can be from spices, herbs, barks, nuts and seeds, fruits and berries and/or roots which are used in various combinations to create specific flavor profiles to accent a cocktail.
Originally bitters were created for medicinal purposes. Extracts made by infusing plant elements in alcohol to draw out the curative powers were prescribed for all natures of ailments. To mask the bitter taste (help make the medicine go down) the medical practitioners would advise adding the bitters to honey, tea, juices and even wines and ales. Yes, the first "cocktails" employing bitters were quaffed down by prescription.

One of the first mentions of the use of bitters simply for taste comes from The Balance, and Columbian Repository which defined a cocktail as a "stimulating liquor, composed of spirits of any kind, sugar, water, and bitters.” The practice itself was much older, dating back to around 7,000 B.C. when a drink of grapes, rice, honey, and (very bitter) hawthorn berry was discovered in China, though this may well have been a medicinal application.

Thanks to the Temperance movement in the 1800s, bitters became mainstream because, as a medicinal cure, they were not subject to spirit taxation. Being touted as medicine they were also a vehicle of profit for flim-flam men who brewed up and sold all nature of nasty bitter concoctions (most often high proof) as cure-alls for nearly every disease known to man. In 1908 the Pure Food and Drug act put an end to the flim-flam trade and only reputable brands remained, at least until Prohibition when alcohol based bitters were deemed illegal. At the end of Prohibition, Peychaud's and Angostura were the only two brands to survive the Volstead Act. 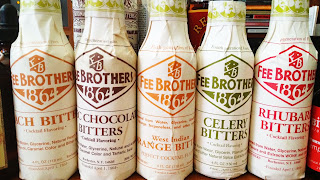 It wasn't until the early 1950s that Fee Brothers came to join the bitters market with their aromatic and orange versions. Forty years later Gary Regan began the modern day resurgence of artisanal bitters when he introduced his Regan’s Orange Bitters No. 6. Fast forward to the 21st century and we have arrived at a heyday of cocktail bitters with access to dozens of new brands and a multitude of exotic flavor profiles that are limited only by imagination. We even have access to a plethora of online tutorials for homemade bitters should the need arise for a bespoke bitters recipe.

The basic bitters necessary to every well stocked bar are Angostura Bitters, orange bitters and Peychaud's bitters. There are too many classic cocktails that cannot be made without one of these three, but you can personalize the classics or any drink (check out my Chocolate version of a Rob Roy) by substituting any one of the wonderful new bitters flavors available in today's craft cocktail loving world. The standard aromatic bitters of the medicinal days are things of the past as bitters rapidly expand into new territory like chocolate, coffee, lemon, lime, grapefruit, cherry, peach, rhubarb, mint, cardamom, cinnamon, ginger, lavender, arugula, celery, chocolate mole, fig and sriracha. Combos are gaining ground and even specialties like barbecue, Mexican mole and Prickly Pear are showing up to play. If that's not enough for you to play with, try making your own bitters. 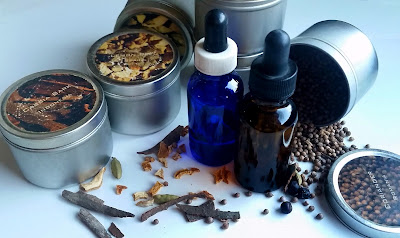 NOT JUST FOR COCKTAILS ANYMORE - WHY BITTERS SHOULD BE IN YOUR KITCHEN AS WELL AS YOUR BAR
Bitters are the salt of the cocktail world, like salt they wake up the palate and they help focus the flavors in a cocktail as well as bring their own tastes to play. They can balance out sweetness and acidity, smooth out aggressive ingredients and accentuate a particular taste profile with just a drop or two. They are the "seasoning" of the bar and, as people discover that bitters are just more creative food extracts that can be used much like the familiar vanilla and almond, those little bottles are beginning to show up in cooking environments as well. Bitters can be employed in a multitude of cooking and baking techniques and recipes as well as be the star of non alcoholic beverages.

WAYS TO USE COCKTAIL BITTERS IN FOOD
PERK UP YOUR COFFEE OR TEA: Add a few dashes of some chocolate bitters or a dash of two of cherry of orange to your morning cup.

CAKES, COOKIE, MUFFINS: Wherever it calls for an extract? Use some bitters instead, just be careful as bitters are generally much more powerful than extracts. Start with a few drops, not teaspoons.

DRINKING WATER: Add a few drops to carbonated soda water for a refreshing cooler. Sweeten this with honey and you have a great way to kick the cola habit. Tap a bit of a citrus bitters into your tap water to cover the taste of the purifying chemicals.

SALAD DRESSING: Add a few drops of an aromatic or herbal bitters to your oil & vinegar. I love using arugula bitters and celery bitters for this application. I've also been know to tap in some orange, pomegranate or fig bitters.

ICE CREAM: Add a few drops of bitters to the custard for homemade ice cream (add after cooking the custard because heat can disrupt the balance and flavor of the bitters depending on its ingredients) or tap a drop right on top of that pint of Ben & Jerry's® or Häagen-Dazs®. My favorite combinations are a drop of floral bitters on fruit ice creams and a drop or two of coffee bitters on chocolate ice creams.

ADD THEM TO WHIPPED CREAM for a punch of extra flavor. My favorites here are coffee, chocolate and cardamom.

GET CREATIVE
I often use bitters in my desserts to cut the cloying sweetness.  A few drops of cardamom in a caramel apple pie, some coffee bitters in chocolate frosting and a drop or two of cinnamon or orange bitters in cream cheese frosting can take a dessert to another level. I've also been known to add cilantro bitters to salsa when I don't have any fresh cilantro and I even tap a drop of something interesting on a fresh apple or pear sometimes.

If you want to experiment you can buy travel or tester sets of many brands which include several different flavors of bitters. This is a great way to add to your home bar bitters collection as well. Amazon has several sampler sets including The Bitter Truth

,  which gives two flavor group options.
There are now too many bitters brands out there to list them all, but some of the most well known are, again, Angostura, Peychaud's, Fee Brothers and Regan's Orange Bitters No. 6.
Here's a short list of some of the other popular bitters available:
Scrappy's Bitters
AZ Bitters Lab
Hella Cocktail Company
Frape & Sons
Miracle Mile
Cecil & Merl
The Bitter Truth
Bittermen's
Bitter End
Boker's Bitters 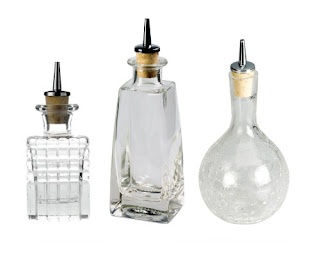