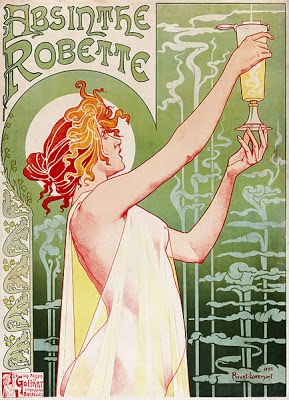 Image in the Public Domain

It's National Absinthe Day
You've probably heard of Absinthe at one time or another, most likely in the context of the proclaimed "psychotropic dangers" of this unusual alcohol. Possibly you heard it mentioned in relation to such notables as Van Gogh, Degas, Picasso, Ernest Hemmingway or Oscar Wilde.  It was the darling of Happy Hour during the 17th Century in Parisian bistros, the liquid muse of the free thinkers of the day and it became an integral part of the bohemian culture of the times.

WHAT IS ABSINTHE?
Absinthe is a pale green aperitif with a licorice like flavor that will louche (turn milky) when water is added. It was originally made with grand wormwood (artemisia absinthium) and Green Anise, petite wormwood (artemisia pontica, aka Roman wormwood), fennel, and hyssop.  The wormwood oils are what contains thujone, the ingredient thought to be the psychoactive agent that caused all the trouble.  The true story is more complicated than that and revolves more around the higher alcohol level of Absinthe (sometime up to 72% alcohol), abuse of the drink, cheaper contaminated versions and the hysteria of the Victorian era.

The name Absinthe is actually of Greek origin, the root word being "apsinthion" which translates as bitter.  The bitterness of this liqueur comes primarily from the wormwood.

THE TRUTH ABOUT WORMWOOD & THUJONE
Wormwood is a herb related to the daisy family that grows wild in many areas of Europe. In too high a dose thujone is dangerous but the thujone actually found in absinthe is many thousands of times lower than the dangerous level, especially in today's federally monitored versions.

From ancient times thujone has been prized as one of the most valuable medicinal herbs. An Egyptian papyrus from 1600BC praises the medicinal qualities of wormwood, Pythagoras believed that wormwood leaves in wine would ease childbirth and Hippocrates recommended it for anemia and rheumatism. Today, wormwood oil, the oil obtained from Artemisia absinthium can be found in many over the counter remedies here in the U.S.

PANIC IN THE BARS OF EUROPE
Thanks to the sensationalism of the Lanfrey Murders, the movement to ban the liqueur, fueled by the Temperance Movement and the morals of the times, turned Absinthe into the evil green devil of the day.  It was blamed for madness, murder and mayhem - some even said it was Absinthe that drove Van Gogh to chop off his ear!  After many petitions and powerful opposition to the liqueur, Absinthe was made the scapegoat of much of the insanity and infamy of the era and the pressure was on to remove it from the reach of the public.  First banned in the Congo Free State in 1898, then in Brazil and in Belgium in 1906, Holland followed in 1908, Switzerland in 1910, the USA in 1912 and finally in France in 1915.

Recently these bans have been lifted in many countries in Europe, including France, the United States and Canada and Absinthe is enjoying a Renaissance in the cocktail world.

THE ABSINTHE RITUAL OF LA LOUCHE 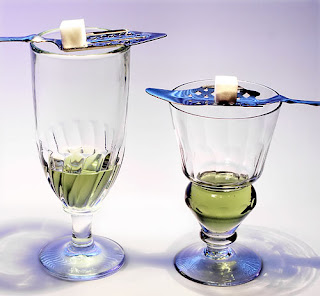 La Louche is the classic ritual of drinking Absinthe where a perforated spoon holding a cube of sugar is set over the glass of the aperitif, and cold water is slowly poured over the sugar and spoon turning the translucent green liqueur into a milky, opalescent drink.  The cold water serves two purposes, first it dilutes the strength of the powerful alcohol and second, it purportedly released  "The Green Fairy"  i.e. the hallucinogenic qualities of the wormwood in the Absinthe.  The Green Fairy was more than a nickname for Absinthe, in the late 1800s it was also a symbol of artistic enlightenment and exploration, of poetic inspiration, of free thinking and changing social orders, thus making it the "Green Muse" or "Green Goddess" of artists and writers alike.

Contrary to popular believe, setting the sugar cube on fire was not part of the original ritual, but is a more recent addition.

ABSINTHE MAKES IT'S COMEBACK FROM INFAMY
Made legal again here in the U. S. in 2007, today's versions of Absinthe contain less than 10mg of thujone per litre (in keeping with the  EU regulations), and the alcohol volume is considerably lower.  There is a great resurgence of interest in this aperitif and you'll find it popping up in chic bars and restaurants all over the country.

You can now enjoy Absinthe Cocktails and even the Ritual of La Louche without fear of flashbacks or insanity (or loss of ears) from enjoying this unusual and historical apertif.

SOME ABSINTHE COCKTAILS TO ENJOY

DEATH IN THE AFTERNOON 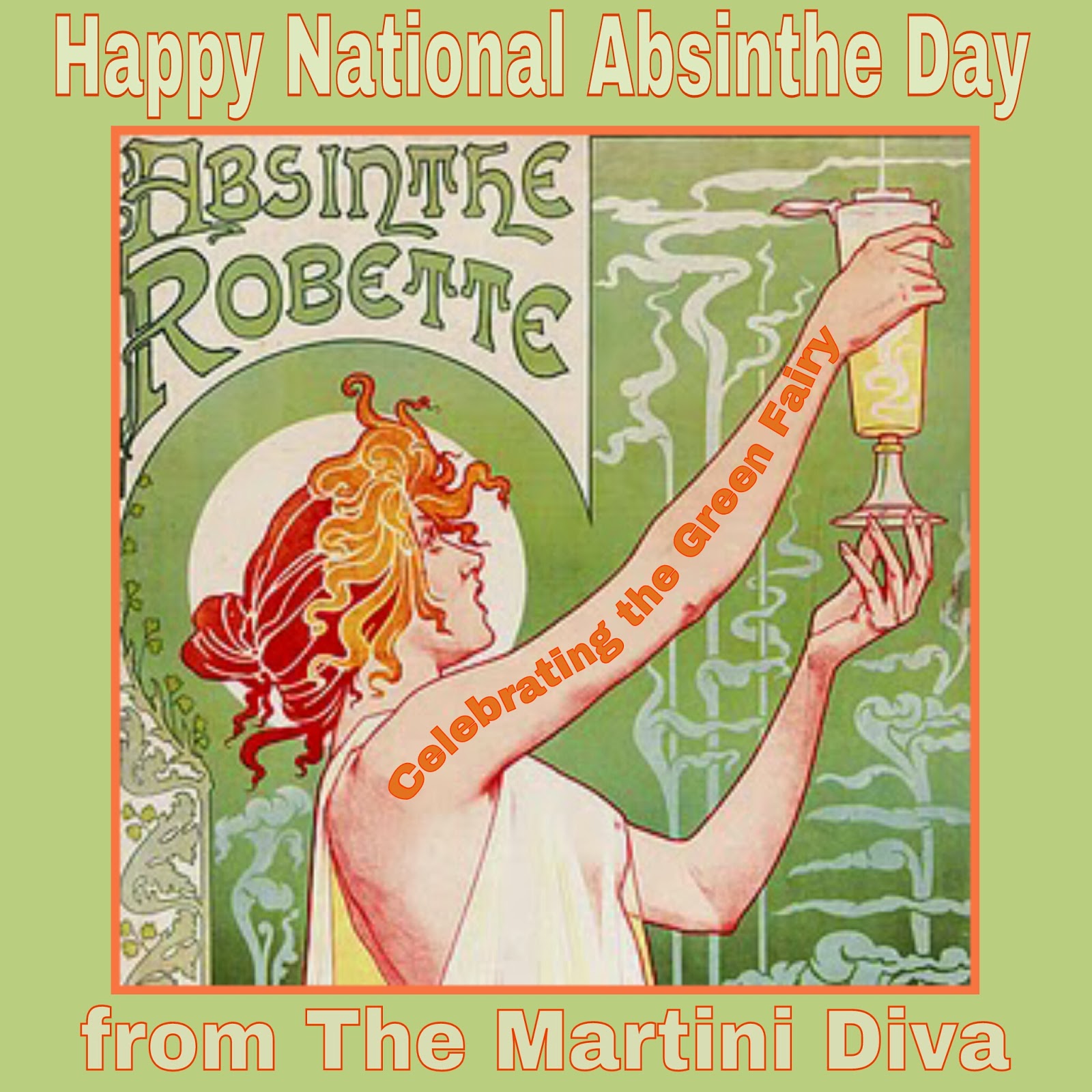 Posted by Pop Art Diva Enterprises at 10:38 AM