YOU NEED A HUG! COCKTAIL RECIPE 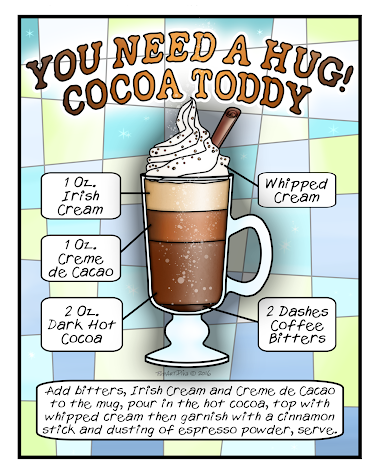 This cocktail recipe is also available as a coloring page in my
COLOR YOUR COCKTAILS Adult Coloring Book available on Amazon.
First celebrated on January 21st, 1986 in Clio, Michigan, National Hug Day was created by Kevin Zaborney to encourage the world to hug the people they loved more often. Zaborney felt something was needed to combat the general malaise that struck folks after the holidays and started the movement, though he felt ultimately it would fail because, "American society is embarrassed to show feelings in public". Happily he was wrong because thirty years later the world still celebrates National Hug Day.
Curious, I googled to see if there was a hug cocktail, and sure enough there is a cocktail called the Big Hug which consists of Irish Cream, creme de cocoa and hot cocoa. Like I always do, I changed that recipe slightly and added some coffee bitters to balance the sweetness and a cinnamon stick for a little spice.
YOU NEED A HUG
COCKTAIL

DIRECTIONS:
Tap the bitters into the glass. Add the Irish cream liqueur and the creme de cocoa then pour in the hot cocoa and top with whipped cream. Garnish with a cinnamon stick and a dusting of espresso powder.

Posted by Pop Art Diva Enterprises at 8:50 AM