The End of The World Rapture Martini 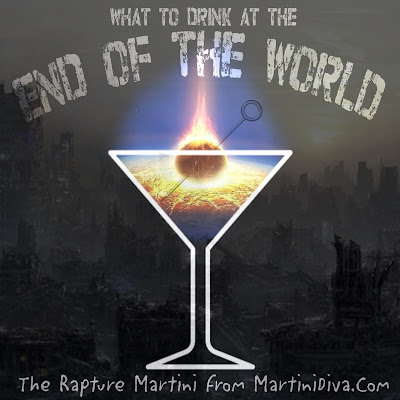 "What the caterpillar calls the end of the world, the Master calls the butterfly."
~ Richard Bach

For those of you who buy into all the doomsdayer propoganda and think the world is going to end today or tomorrow or the next time some crackpot misreads some biblical text and proclaims the end of the world, here's your (updated) apocalypse cocktail.

The New
END OF THE WORLD
RAPTURE MARTINI

Sadly, Forbidden Fruit Liqueur, which I originally used for my Rapture Martini is no longer made. 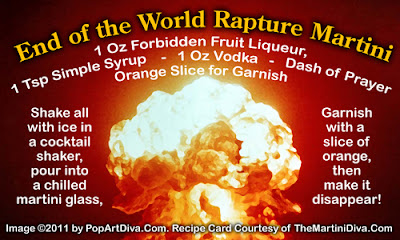 I admit my bottle was a gift given to me as a joke on a long past birthday. It was a cool curiosity so I kept it, but it sat around gathering dust for years until all the brouhaha over some hayseed preacher's apocalyptic predictions went viral in 2011. Interestingly enough it was still palatable, even decent, and perfect for a doomsday drink. When I see what some unopened bottles are selling for on eBay, I now wanna slap myself for opening the bottle.

If you'd like to try that older recipe, here's one recipe for Forbidden Fruit Liqueur by Eric Ellestad over at Savoy Stomp.
Here is another recipe made with actual pomelos, the main citrus originally used in Forbidden Fruit Liqueur. I make no guarantees on these recipes because I haven't tried either of them, but go for it if you're of a mind to taste some forbidden fruit.

Now, for those of you who have led a somewhat questionable life and are too proud to repent:
THE GATES OF HELL MARTINI

and for those of your who are convinced you've led a pristine and holy existence and think you're heading to Paradise:
THE ADAM & EVE MARTINI

For the rest of us who figure we're going to be around for a while yet, bookmark this site for new cocktail recipes every week.

Bless you, my booze guzzling children, may the spirits speak to you in heavenly voices - the spirits of vodka, rum, gin, tequila & whiskey that is.