My ghoulishly great Halloween cocktail #4 is The Blood & Guts Martini - a spicy style Bloody Mary Martini with the kick of jalapeno peppers, hot sauce and a dash of chili pepper.  This puts enough heat in Halloween to wake up the walking dead so keep it away from the zombies! 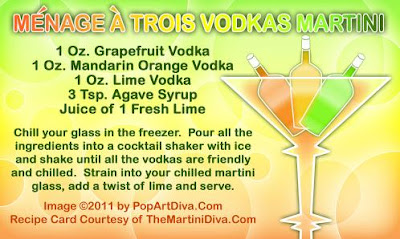 
vod·ka (v d k ). n. An alcoholic liquor originally distilled from fermented wheat mash but now also made from a mash of rye, corn, or potatoes.

I can't think of any better cocktail to celebrate National Vodka Day with than my Ménage à Trois Vodkas Martini, a triple threat of three flavor infused vodkas with a splash of lime and a dash of sweetness.  It's a powerful cocktail that is nearly all alcohol so sip slowly and with caution, just the way you would if enjoying a shot of ice cold, quality vodka straight.

In Vodka Vérité - A little truth about vodka
The word "vodka" is derived from the Slavic word "voda" which means "water" and the first record of "vodka" was in 1405 in Akta Grodzkie In those first days the word vodka, or wódka, was generally applied to the chemical compounds for medicines or cleansers while the popular drink was called Gorzałka, an Old Polish word that meant "to burn".

In one form or another vodka has been making people happy since the Middle Ages. Once advertised as the alcoholic beverage that "leaves you breathless" (meaning you cannot smell it on your breath), vodka started gaining increasing popularity outside Europe as early as the 1950s and became a top contender in the liquor market in the 1970s when it rose above bourbon sales in the United States.


With a comparatively neutral flavor compared to other spirits, vodka is considered by many to be an ideal base liquor for a wide variety of cocktail recipes as well as a perfect alcohol for flavored infusions.  Walk in any grocery store or liquor store today and you will see entire aisles of vodka in every possible flavor from bacon infused vodka to whipped cream vodka.

Almost everyone, from Dan Ackroyd (Crystal Head Vodka) to Donald Trump (Trump Vodka) to P. Diddy and Dennis Rodman have or had a vodka brand on the market.  There have been vodkas marketed to women (Pink Vodka), to the rich (Stoli Gold) and even to Rich Women (Diva Vodka) and brands toss around words like premium, super-premium and luxury like the mad men of the sixties tossed around "new and improved"

It's a vodka jungle out there and a pefect environment for all of us wild vodka animals. So I say Carpe Vodka, and seize a few bottles for me while you're at it!