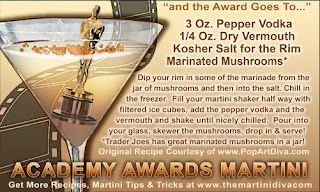 To put a little heat in your Oscar viewing, I've taken a classic Vodka Martini and put a little spice in it using pepper infused vodka.  Instead of the traditional olive garnish I've used marinated mushrooms and added a salted rim for a little more seasoning on the Academy Awards.

Maybe I'm hoping for a classic style Oscar show that has a little bit of pepper in it?  I'm on the fence at this point about the hosts. Though I really like Anne Hathaway, I'm not that familiar with James Franco. The commercials both have participated in to promote the awards show this Sunday have seemed somewhat cute, but I tend to prefer a comic host who adds lots of laughter and tosses out in-jokes left and right, awards shows can be dull and slow paced without some decent entertainment sprinkled about.

No matter how the Oscar show goes on Sunday, at least you enjoy some good eats with some of my TINY FOODS and have a great party by serving up any of my OSCAR COCKTAILS.

I wish them both well and, if the commercials are any indication, we are at least going to enjoy some charm from these two hosts - but I'm still hoping for a streaker or two. . .