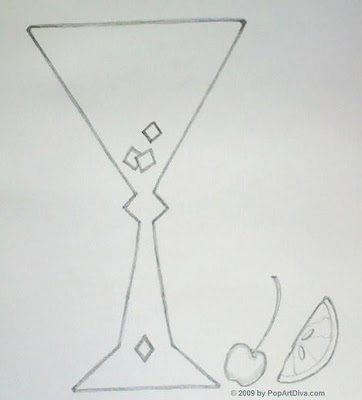 MARTINI QUOTES
Why don't you get out of that wet coat and into a dry martini? ~ Robert Benchley

The three-martini lunch is the epitome of American efficiency. Where else can you get an earful, a bellyful and a snootful at the same time? ~ Gerald R. Ford (38th US President)

One martini is alright, two is too many, three is not enough. ~ James Thurber

Happiness is finding two olives in your martini when you're hungry. ~ Johnny Carson

A MOST EXPENSIVE MARTINI
You can actually enjoy a $10,000 Martini at the Algonquin Hotel in New York City - the garnish? A beautiful, REAL radiant cut Diamond!

JAMES BOND - SHAKEN, NOT STIRRED - VESPER or MARTINI?
The famous James Bond phrase "shaken, not stirred" was not a reference to a classic gin martini (which is not shaken as that bruises the gin) it was most likely used for a vodka martini. Bond drank both versions throughout the book and movie series, but the first drink he ordered "shaken" was actually a cocktail that is now called a Vesper:


"Just a moment. Three measures of Gordon's, one of vodka, half a measure of Kina Lillet. Shake it very well until it's ice-cold, then add a large thin slice of lemon peel. Got it?" ~ James Bond in Casino Royale, 1953.

So, James Bond, is not a heathen and defiler of the classic Gin Martini, he is simply a man of eclectic martini tastes! The name Vesper, by the way comes from a female agent in the same movie:


"When I'm ... er ... concentrating.' he explained, 'I never have more than one drink before dinner. But I do like that one to be large and very strong and very cold and very well-made. I hate small portions of anything, particularly when they taste bad. This drink's my own invention. I'm going to patent it when I can think of a good name."~ James Bond in Casino Royale, 1953.