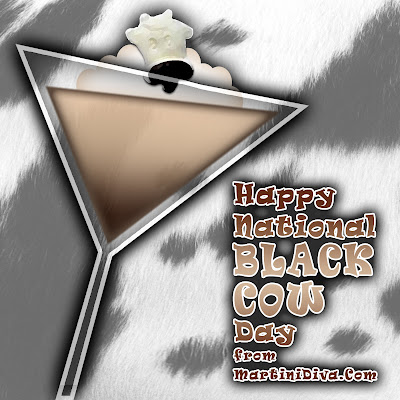 Why tip cows when you can tipple a martini?

This cocktail is inspired by the vintage name of what we now call a root beer float - the Black Cow. The Black Cow was invented in 1893 by Frank Wisner, Jr. of Cripple Creek, Colorado, who decided to float a scoop of vanilla ice cream on his glass of root beer one day when he glanced out his window to see the moon lighting up nearby Cow Mountain. Mr. Wisner served it up the next day and this root beer float became quite popular with the local children who then dubbed it the "Black Cow", a name that stuck well into the twentieth century.

Though traditionally and originally made with root beer, different regions of the United States often use differing sodas for a "Black Cow", most often a cola or chocolate soda. In Kansas, where I grew up, we used cola so this is where my inspiration for this Black Cow cocktail recipe stems from. If you use grape soda that has it's own name, a Purple Cow. (P.S. If you like the idea of root beer instead of cola try my Root Beer Float Cocktail.)

I have used the most common ratios of equal parts of the Kahlua, cream and cola and I kept it simple and garnished it with a dollop of whipped cream. The Cow Gummi Candy can be found on Amazon but you can also just toss on a few chocolate sprinkles if you like.

Because the only cow tipping you should do after your teen years should involve booze. 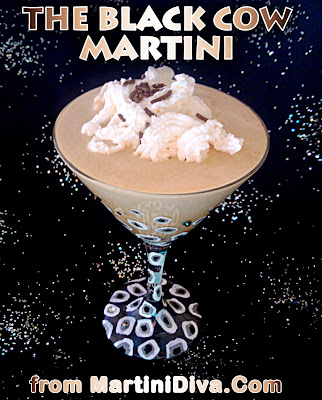 Garnish: Dollop of Whipped Cream topped with a Cow Gummy

DIRECTIONS
Shake the Kahlua and Half & Half with ice.
Strain into a chilled glass.
Top off with the cola.
Garnish and serve.