A MARTINI FOR THE 137th KENTUCKY DERBY 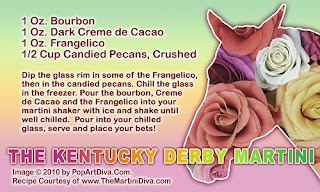 Today is the 137th Annual Kentucky Derby at Churchill Downs.  This Kentucky Derby Martini is a nutty chocolate and bourbon cocktail inspired by a famous Derby food - read more about the creation here.

There wasn't one horse with martini in the name, so, out of the twenty horses that were running in the Derby this year I picked my favorite because of his sexy name, "Midnight Interlude". I also liked the fact his jockey is wearing pink AND his dam's name was "Midnight Kiss".  His odds, at the time of my bet were 13 - 1, but at the time of this post went up to 11- 1 - not great but I kind of like long shots (get it? long "shots"?)

There was another horse called Pants on Fire whose name I liked too and his colors are also pink but his odds were even lower at 20-1 so my money went on Midnight Interlude.

There are now only 19 horses running the race this year (at the time of this post) as Uncle Mo scratched on Friday.

The post time for this year's "Run for the Roses*" is 6:24 p.m. EDT (time subject to change) and if you're not there live you can watch it on NBC - so, get your Kentucky Derby Martinis in hand, place your bets and enjoy the race!

*Why is the Kentucky Derby also referred to as the "Run for the Roses"?  Because the winner of the race is covered with a blanket of 554 red roses.

Enjoy the late Dan Fogleberg's RUN FOR THE ROSES composed for the Kentucky Derby in 1980: