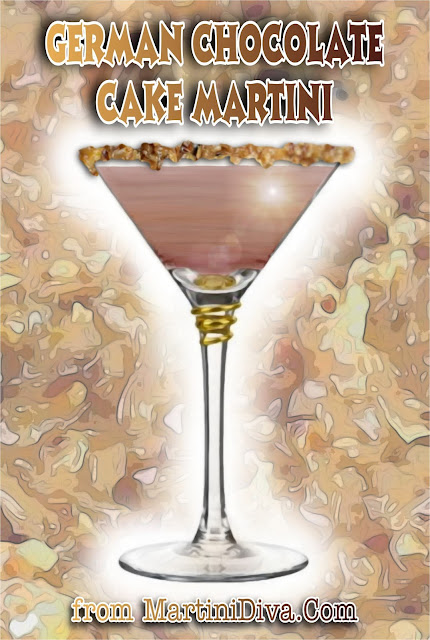 Contrary to popular believe German Chocolate Cake does not come from Germany, it is an entirely American creation. It was originally called "German's Chocolate Cake" after a 100 year old baking chocolate created by Sam German for the Baker's Chocolate Company. Mrs. George Clay, a Texas housewife, used that chocolate in the recipe she sent to The Dallas Morning News in 1957. The recipe was picked up and reprinted by General Foods who owned Baker's Chocolate at that time and it went fifties style viral and ended up one of the most popular cakes in America!
I've brought all the classic flavors of Mrs. Clay's German's Chocolate Cake into my German Chocolate Cake Martini recipe. I used my own Homemade CANDIED PECAN LIQUEUR which brings that lovely caramelized pecan flavor to the cocktail. (You'll find you will use that liqueur for a lot more cocktails than this martini and it's great over ice cream.) 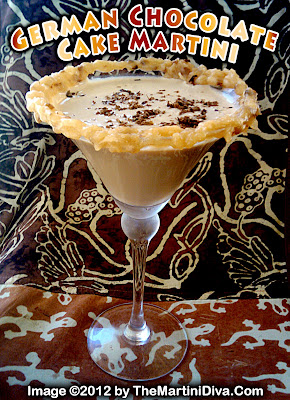 To bring in the cake flavor I used Cake Vodka, and for the coconut I used Cream of Coconut which really adds a sensuously creamy and sweet coconut flavor. And for the chocolate I used Godiva Chocolate Liqueur and chocolate milk.

But the best part is the rim - I grabbed that coconut pecan frosting and piped on a nice, thick thread of it across the whole rim! You can use shredded coconut if you would like, or even coconut & chopped pecans but the frosting is what really brings home the whole German Chocolate Cake Experience. 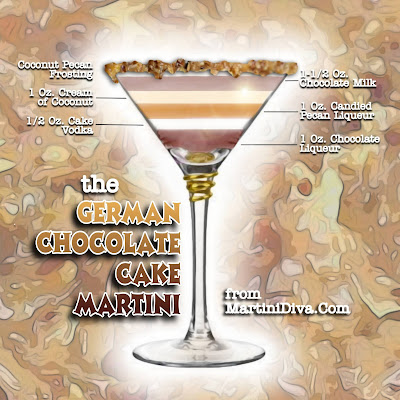 DIRECTIONS:
Pipe two tablespoons of coconut pecan frosting on to the rim of your cocktail glass then chill your glass in the freezer.
Fill a cocktail shaker with ice, add the ingredients and shake until chilled.
Strain into a cocktail glass and serve.
P.S. At the last minute I jazzed up the garnish with some leftover chocolate shavings I had on hand from making my cake. Waste not, want not as my mom used to say.
VOICEOVER VIDEO WITH INGREDIENTS AND DIRECTIONS:
June 11th is
NATIONAL GERMAN CHOCOLATE CAKE DAY 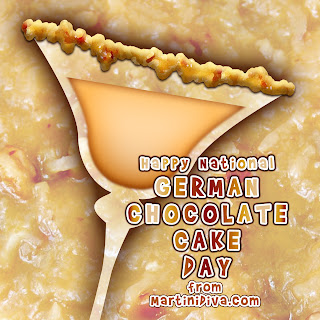