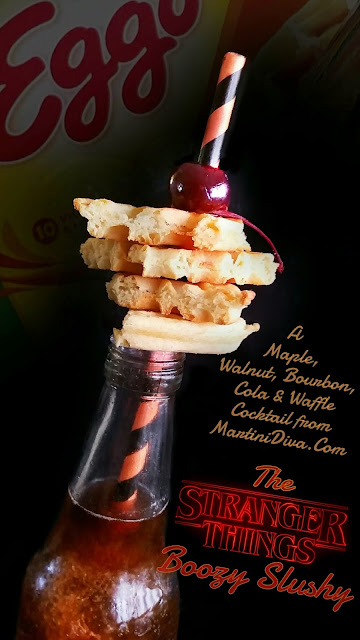 When I think about Netflix's Stranger Things the first thing that comes to mind, of course, is Eleven (Millie Bobby Brown). But the next thing that comes to mind are Eggo waffles. El's fondness for junk food is a theme throughout season one. Being on the run from Papa (Matthew Modine) and Hawkins National Laboratory, junk food is the easiest food for her to get her hands on and she is a kid, albeit a strange kid, so Eggos figure heavily in Eleven's diet. 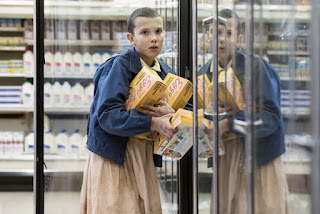 Mike (Finn Wolfhard): "Don't worry, when all this is over you won't have to keep eating junk food and leftovers like a dog anymore. My mom, she's a pretty awesome cook. She can make you whatever you like."
Eleven: "Eggos?"
Mike: "Yea, Eggos, but real food, too."

When she disappears after disintegrating the Demogorgon, Chief Hopper (David Harbour) gives us hope Eleven is still alive by placing plates of Eggo waffles in a box for her on Christmas eve.

Coke shows up a lot, most likely as a result of paid product placement, but still cans of it pop up often. Chocolate pudding makes an appearance as a lunch lady's hoarded food and there are multiple mentions of other edibles, also mostly junk, but not always:
Dustin (Gaten Mazzarrato): "Alrighty, so we've got Nutty Bars, Bazooka, Pez, Smarties, Pringles, Nilla wafers, apple, banana and trail mix."

I'm saving my binge of this year's season for a full day treat so no spoilers here, but I couldn't pass up doing a Stranger Things Cocktail and took my cue from the primary munchies of season one. Since cocktails aren't for kids but the show is about kids, I went down a sort of Upside Down cocktail recipe trip of a maple waffle cola slushy, appropriately served up in a soda bottle with a straw. If you want to make these for kids simply replace the bourbon with a dash of maple syrup and add a few walnuts on top of the Eggos. 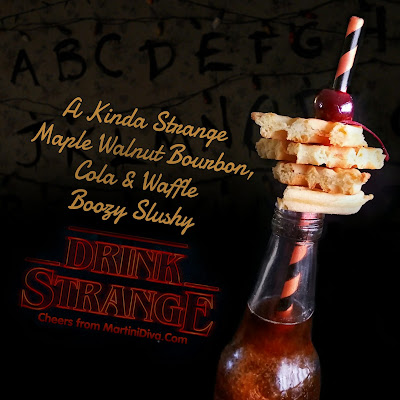 DIRECTIONS
Pour the bourbon into your soda bottle then add enough cola to fill the bottle but ONLY to three quarters full. You must leave this room because you are then going to place the bottle in the freezer to turn it slushy.
After an hour take the bottle out and give it all a stir with the skewer then place it back in the freezer.
Another hour in the freezer should be enough for full slush (if not simply stir then put it back in the freezer again). You'll notice the drink has started to swell.
Take the bottle out and give it a good stir (don't shake, unless you want bourbon and soda all over your face).
Slip the waffle quarters and the cherry on your straw and pop this in the soda bottle and serve.
Stranger Things Day is celebrated every November 6th. 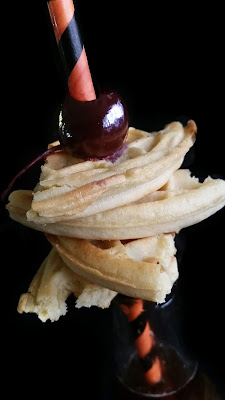 "Something’s coming. Something hungry for blood. A shadow grows on the wall behind you, swallowing you in darkness. It is almost here."

Posted by Pop Art Diva Enterprises at 8:03 AM