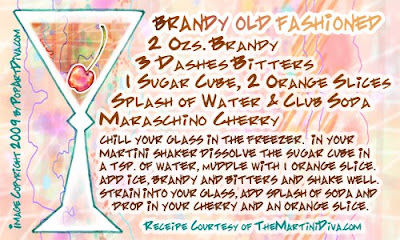 The Brandy Old Fashioned is a cocktail that I was introduced to by a lovely lady who was a neighbor of mine decades ago. I was going to San Jose State and living downtown in an apartment near the police department. It was a great old apartment building with wonderful architectural accents so it was worth all the sirens at all hours of the day and night.

My neighbor, Mrs. Smothers, was a grand, older lady who happened to have been one of the first female deputies in the area at a time when women were still relegated to home and hearth. She was a kick and an inspiration to a young woman like me - I was career minded and wanted to be a professional artist.

Mrs. S invited me over one evening for a "cocktail" and I accepted. Her apartment was across from mine, reversed in layout but our decors were like us - separated by decades and a lifetime of memories. Her memories were all about her home while mine hadn't been made yet. My apartment was modern, bright and furnished from second hand shops, hers was lace, antiques and photos of famous people and places. I felt like I had walked into a movie set from another era and I loved it.

After I arrived and sat down, Mrs. S tottered over to her kitchen and mixed up a couple of drinks. She told me they were Brandy Old Fashioneds and were her favorite, did I like them? I said I'd never had one but was willing to try. She put a couple of extra cherries in mine - I loved it and it's been a favorite cocktail of mine ever since that night.

Whenever I have a Brandy Old Fashioned, I raise my glass to Mrs. S and remember those happy hours filled with her memories and those cocktail dates that are now a nostalgic memory.
MORE OLD FASHIONED COCKTAIL RECIPES
PLEASE DRINK RESPONSIBLY