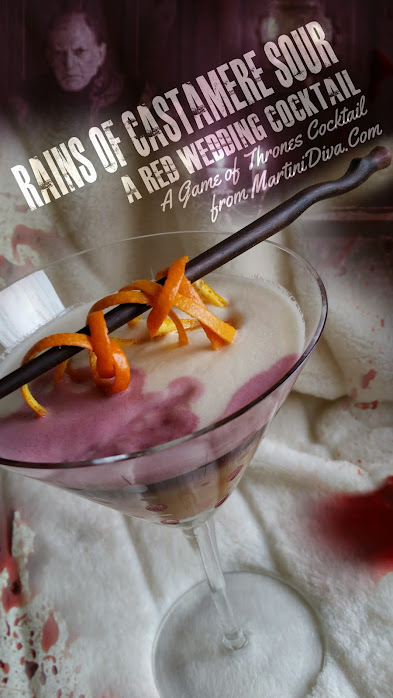 A traditional New York sour consists of rye whiskey, simple syrup, fresh lemon juice, an egg white then a dry red wine float. The bloody part is when you float that red wine over the back of a spoon and it floats on top of a cocktail slowly oozing down into the drink. Tell me that's not a perfect visual for the Red Wedding!

The way I poured in the wine float represents the flowing of blood and betrayal over the purity of trust and union.
The
RAINS OF
CASTAMERE SOUR
A Red Wedding Cocktail
INGREDIENTS:
2 Oz. Diplomatico Rum
3/4 Oz. Spiced Honey Syrup*
1/4 Oz. Fresh Lemon Juice
3/4 Oz. Fresh Blood Orange Juice
2 Tablespoons Pasteurized Egg White
2 Dashes Scrappy's Grapefruit Bitters
1 Oz. Malbec Wine
Garnish: Orange twist knot
Tools: Channel knife, Cocktail shaker, Strainer, Bar Spoon
Glass: Cocktail
DIRECTIONS:
*Take a tablespoon of Honey Ridge Farms Honey Créme Spiced and thin to a syrup consistency with a tablespoon of hot water.
Take a channel knife and carefully start at the top of an orange and channel out a very long twist. Wrap this into knots and drape over a rustic wooden stick.
Dry shake (without ice) all ingredients except the red wine to emulsify the egg and create a foam. Shake again with ice to chill and dilute then strain into a chilled glass. Float the red wine over a spoon on top, let it flow like the blood the The Red Wedding,  garnish and serve.
"Not murder. It was vengeance, we had a right to our vengeance. It was war." ~ Merrett Frey 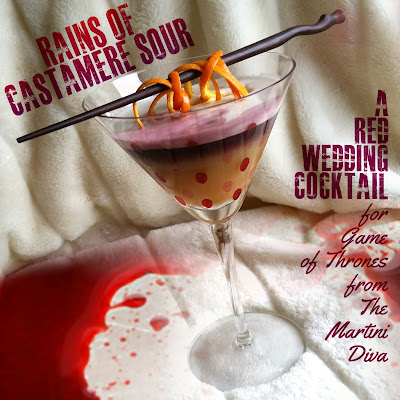