YOU'VE GOT A HANGOVER, DO YOU? 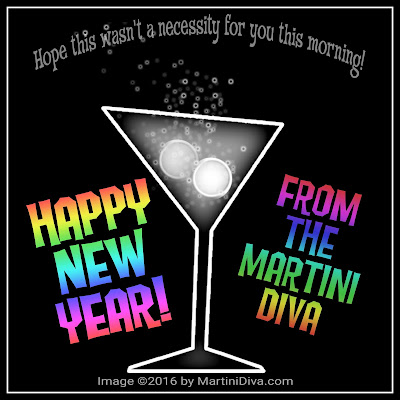 Happy New Year! I hope you had a wonderful, safe and fun filled New Year's Eve.

I also hope you didn't over indulge and wake up with a hangover BUT if you just couldn't turn down that 3rd cocktail here's some hangover facts and fiction to help your through the day:


THERE'S GOT TO BE A MORNING AFTER?


WHAT IS A HANGOVER?

The medical term for a hangover is Veisalgia, from the Norwegian word for "uneasiness following debauchery" (kveis) and the Greek word for "pain" (algia). A hangover, aside from being one of the most miserable things you can suffer, is basically your body's reaction to the large amount of chemicals and toxins from the liquor you poured into it the night before. (P. S. don't you just love the word debauchery?)

There are a lot of chemicals in booze that are toxic. These toxic impurities are called Congeners Some alcohols have greater amounts (wine) than others (vodka), but all of them have some. While pure alcohol or ethanol is supposedly toxin free that's not what you were drinking last night. Humans cannot consume "pure" ethanol.

If you were not drinking your booze "over" (a shot of a liquor over ice aka "on the rocks") then you were mixing it with something - juice, tonic, water, colas and even other types of alcohol. More toxins are introduced with each additional ingredient and you face the issue of chemical reactions between the ingredients. Your liver will be working overtime to get rid of these toxins by flushing them out and this leads to dehydration. Welcome to 2010, you are dehydrated!

Alcohol can disrupt your brain function - it is a drug, after all! Therefore your REM (rapid eye movement) sleep can be badly affected and REM sleep is where you get your deepest rest. Yup, you are now dehydrated and sleep deprived.

Alcohol causes your blood vessels to expand, which can lead to headaches. So, you are dehydrated, sleep deprived and your head feels like it's going to do an "exorcist" and twist right off your neck.

Wondering why you have the shakes this morning? Contrary to popular thought, alcohol does not raise your blood sugar, it can actually lower your blood glucose. Alcohol inhibits the liver from making glucose, so if you haven't eaten, you run the risk of low blood glucose (hypoglycemia). Now, you're dehydrated, sleep deprived, have a headache and you've got tremors!

Alcohol irritates the lining of your stomach, increases the production of stomach acid and delays stomach emptying. Great Ghost of a Guzzling Gatsby, you are now dehydrated, sleep deprived, have a splitting headache, you're shaking more than a fiver on the Richter scale and your burning tummy is threatening to jump completely out of your body. Happy New Year. You have a hangover.


HOW DO YOU STOP THE MISERY?
PRE-TREATING A HANGOVER

It's actually too late now but if you thought you could stave off a hangover by pre-treating yourself, think again. Taking a pain killer before you go out to party will not stop a hangover. In fact, taking certain pain killers, acetaminophen in particular, can actually cause permanent liver damage! Relatively low doses of acetaminophen taken with large amounts of alcohol has been documented to have caused several deaths. Aspirin is a blood thinner and can cause additional stomach irritation. Remember that pain killers are drugs and alcohol is also a drug, mixing drugs is dangerous.

The British Medical Journal of 2005 concluded that other forms of hangover "pre-treatments", including taking fructose or dietary supplements (such as yeast based preparations) don't work either. Their conclusion: "No compelling evidence exists to suggest that any conventional or complementary intervention is effective for preventing or treating alcohol hangover."

Eating before you go drinking will help to slow down the body's absorption of the alcohol but it will not stop it. A little food in your stomach if you're having a drink or two can alleviate stomach irritation. But no food will cure a hangover*.

Sorry Charlie, unless you can hire Superman to turn back time so you can ABSTAIN or DRINK IN MODERATION, there is nothing that will prevent that hangover.


I WANT TO DIE, WILL NOTHING HELP?

What will and what won't make you feel better when you wake up with your head pounding, your mouth drier than the Sahara and your stomach threatening to erupt like Vesuvius?

HAIR OF THE DOG: The oldest known hangover "cure" is to mix yourself a Bloody Mary, drink a Beer, tipple a little brandy in the morning coffee. Okay, this actually does work a bit because the alcohol will numb you a bit to the misery. BUT, and that's a big BUT - drinking in the morning to ease the effects of drinking at night is kind of like throwing oil on a fire, doing this often is an indication you have a drinking problem. It's a short cut to becoming addicted. Your liver needs to detox from the effects of the demands you're making on it from the night before. Resist the temptation to use alcohol to cure alcohol induced pain!

OVER THE COUNTER HANGOVER CURES: Okay, didn't you read that article from The British Medical Journal of 2005 I gave you above? No? Go back and read it again. Most "hangover cures" are simply a few vitamins and supplements with the directions to drink a full glass of water with each dose - it's the water that is most helpful as it serves to rehydrate your body.

*FOOD CURES: You might not have any interest in any kind of food right now but some foods can help you recover quicker and some can make the situation worse.


IN CONCLUSION and Disillusion!

The best cure is simply suffer the indignity, hydrate and sleep it off. I look at a hangover as Mother Nature's warning not to abuse alcohol. Let's face it, feeling really crappy after you do something is a good deterrent to doing it again! Or it might be if you haven't killed all your brain cells by drinking too much.

If you want to know more about hangovers - and you can keep your head spinning down to read it - one of the best articles I found on a hangover was "Biological Impacts of Alcohol Use: An Overview"


THE HAPPIEST OF NEW YEARS TO YOU ALL!
Uodated 1-1-2022
PLEASE DRINK RESPONSIBLY
Posted by Pop Art Diva Enterprises at 10:31 AM