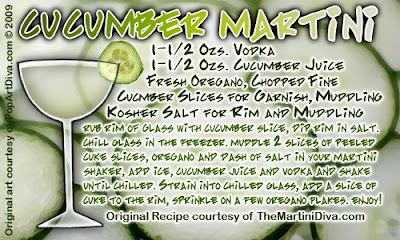 I got a good deal on cucumbers last week and decided to try making another cucumber martini. A few months ago I developed a great martini - actually one of my favorite savory martinis now - The Gazpacho Martini and it has cucumbers in it. Since I enjoyed that martini so much and I had a ton of cucumbers I decided to try another Cucumber martini - this one a savory one. I posted a sweeter based Cucumber Thyme Martini in April, but I wanted something salty this time.

I wanted to give the martini a little herbal touch out of my own garden and wavered between my fresh dill and my fresh oregano until I decided that the dill would make this martini taste like a dill pickle. Now, that's not actually a bad flavor but I wasn't in the mood for a liquid dill pickle so I chose the oregano and it was a good choice.
This Cucumber Martini would be a great martini to serve with crudités and other veggie inspired appetizers - many of which you can find at my sister site, The Diva of Tiny Foods.
All in all, it was a perfect martini for a warm summer night out on the deck - refreshing and freshly made - Cheers and To Your Health!
PLEASE DRINK RESPONSIBLY

Posted by Pop Art Diva Enterprises at 7:49 AM