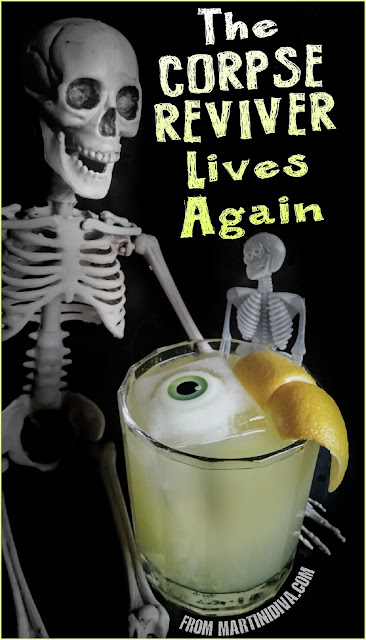 The
CORPSE REVIVER COCKTAIL
and Recipes
A little history, some thoughts and quite a few recipes.
The Corpse Reviver "before 11am, or whenever steam and energy are needed."
~ Henry Craddock
Most references to the Corpse Reviver state that the earliest recipe in print appears in Harry Craddock's 1930 version of "The Savoy Cocktail Book", but recipes for the Corpse Reviver actually appear much earlier in literature, in fact, as early as an issue of Punch in 1861.

Another early recipe for the corpse reviver that pre-dates Craddock's can be found in 1903 in The Steward's Handbook and Guide to Party Catering. 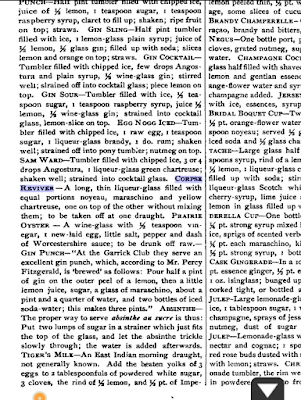 Corpse Reviver 1
2 parts cognac
1 part apple brandy or Calvados
1 part sweet vermouth
Preparation Stir with ice, strain into a chilled cocktail glass.
Corpse Reviver 2
3/4 ounce gin
3/4 ounce lemon juice
3/4 ounce Cointreau (curaçao)
3/4 ounce Lillet (Kina)
1 dash absinthe
Preparation Shake ingredients together in a mixer with ice. Strain into chilled glass.
Two more versions exist, a Kentucky Corpse Reviver which is composed of equal parts bourbon, Lillet Blanc, lemon juice and Cointreau, and the Savoy Corpse Reviver which employs equal parts brandy, Fernet Branca and White Crème de menthe.
Corpse Revivers are considered one of the first "hair of the dog" cocktails, hence the macabre name. However, let's be serious here, I am NEVER going to make this cocktail as a hangover cure, my delicate constitution requires a morning-after libation that is a bit more gentle. I'll leave that arcane remedy concept in a coffin along with the boozers of the eighteenth and nineteenth centuries who thought it a stalwart reviver of their alcohol laden corpses.
That being said, it is a lovely herbal lemon libation, ideal for Halloween. Corpse Revivers are often dredged out of the cocktail mortuary for aptly named spooky drinks and this seems an appropriate application. One or two all decked out in ghoulish garb should really get your party guests started. The #1 is actually a scary, boring cocktail, run screaming in horror. The #2, however, is complex and worthy of digging up from the grave, which is exactly what I did here. But I added a few spooky twists .... 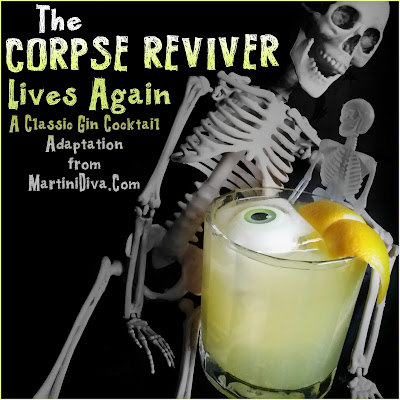 The
CORPSE REVIVER
LIVES AGAIN
INGREDIENTS
1-1/2 Oz. Hendricks Gin
1/2 Oz. Fresh Lemon Juice
1/4 Oz. Fresh Lime Juice
1/4 Oz. Fresh Orange Juice
1 Oz. Cointreau
3/4 Oz. Cocchi Americano
1/8 Tsp. of Pastis
1 Tsp. Simple Syrup
Ice
Garnish: Large Lemon Twist, Skeleton, Large Ice Cubes with Gummy Eyeballs
Tools: Cocktail Shaker, Metal Strainer
Glass: Rocks
DIRECTIONS
Shake ingredients together in a mixer with ice. Strain into ice filled chilled glass. Garnish and serve.
You'll note I added lime and orange juice to the lemon juice. I wanted some slight greenish color from the lime and added the orange to pump up the Cointreau.  I went with Cocchi Americano because the Lillit called for in the original recipes was Kina Lillit, which no longer exists. The present-day version, Lillit Blanc, is minus the quinine that distinguished the original aperitif.
As for the Pastis, I substituted this liqueur for the Absinthe because it's much milder, less licorice aggressive and has sugar which brings a touch more sweetness to the cocktail. I felt it would fight less with the distinctive rose and cucumber notes of my gin choice which has a very subtle licorice back note of its own. 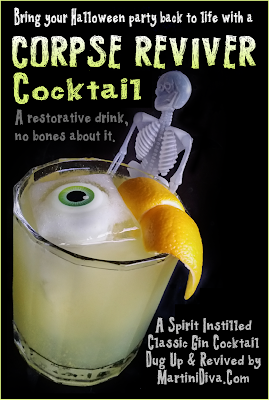