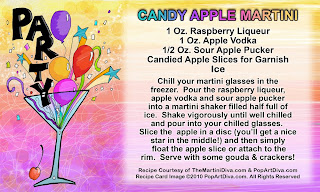 As well as being Halloween, October 31st is also
NATIONAL CANDY APPLE DAY!

The red candy apple was created by William W. Kolb in 1908 while experimenting with cinnamon candy for his Christmas inventory.  He had a batch of red cinnamon candy and dipped a few apples in the mixture to display in his window.  They proved so popular he continued the practice each year in fall and soon the entire Jersey Shore had candy coated apples for sale.

Because hardened sugar is difficult to achieve in humidity, candy apples are rarely found in the spring and summer months in many parts of the U.S., one of the reasons why this treat is so closely associated with Fall.

When I was a kid the candy apples I used to get were more like raspberry flavored caramel apples!  I don't ever remember having a hard coated, cinnamon flavored apple so, to celebrate National Candy Apple Day, here is my version of the 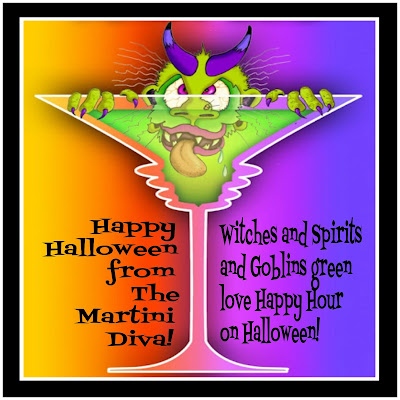 
The Halloween Night Martini is a citrus and raspberry flavored treat of the Halloween darkness with just a few silver stars sprinkled in to light your way as you go about your tricks.

Enjoy and have a safe and Happy Halloween!


Don't forget, All these Martinis PLUS paired Halloween Appetizers are featured in
The Martini Diva's:
HALLOWEEN MARTINIS & MUNCHIES BOOK
ON SALE NOW AT AMAZON
(NOW also Available to Download as an E-Book!)