Tombstone, Tourism and Tipples of the Old West ... You Can't Get There from Here Anymore. 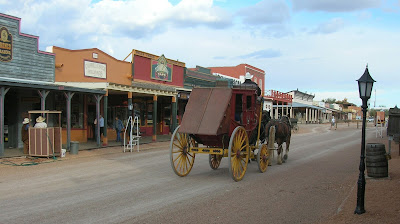 Photo from https://en.m.wikipedia.org/wiki/File:Allen_Street_Tombstone.jpg
My friends, Melodieann (@boomerbizcoach) and Derle stopped here in Tucson this weekend for a visit and a trip to see Tombstone, Arizona. Last year when they had visited me I had spoken of how much I loved Tombstone so we made plans. I remembered Tombstone for its Old West feel, old bordellos turned boutiques and the authentic watering holes that lined Allen Street back on my last visit in the late 90's. (That's the 1990's, not the 1890's, in case you're wondering.)
Tombstone, legendary town of The Old West, one time home of such western notables as Wyatt Earp, Doc Holiday, The Clantons, Johnny Ringo and other heroes, villains and saloon singers, is a National Historic Landmark. That's right, the whole town. Of course it's a fairly small town these days with a population of around 1,500 folks and one short street as it's main attraction, but it's all a National Landmark. At an elevation of 4,550 feet it's also considerably cooler than Tucson and we were all looking forward to the cooler temperatures and the ability to walk the street without melting into the wood planked sidewalks. Me, because, even though I live in Tucson, I had not been back in years, Melodieann and Derle because they'd just come in from Las Vegas and Death Valley. 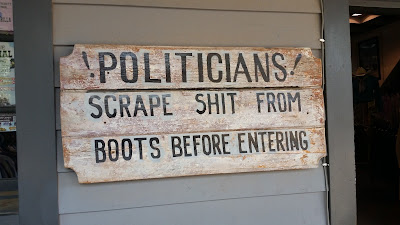 Sadly it was not the Tombstone I fondly remembered, the one with residents dressed in period clothing walking about, great local vittles being sold off western themed street carts (best fry bread I've ever had), historic old buildings and bordellos revamped as fun shops and the occasional and seemingly impromptu gun fights exploding out into the street enacted by dusty and appropriately garbed local actors. My first glance down Allen Street revealed an excessively groomed, too neat, too clean mock-up of a faux old mining town vista. It was more pristine than even Disney could have managed, manicured and molded into a modern lineup of mostly tourist traps, not one horse puckey in sight (despite the constant trudging of the poor stagecoach Clydesdales), not a crumb of character, not a whiff of western ambiance, not one damn gunslinger in sight. I actually looked at the street signs to see if we were in the right place. 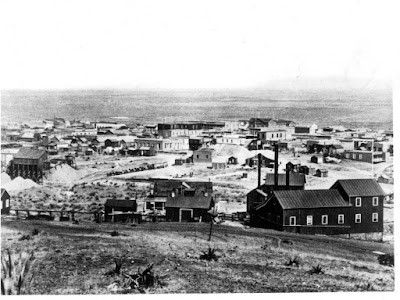 All the things you wanted to see, the O.K.Corral, the World's Largest Rose Bush, The Bird Cage Theater, the Good Enough Mine and yes, even Boot Hill Cemetery are all now locked up and gated behind a ten or twenty dollar sign. You can peek in but if you want real history you'd better be prepared to pay a pretty peso or two hundred to get the real Tombstone. Allen Street is barricaded at both ends and you can ride the "Old Butterfield Stagecoach", for a price.

You might see Wyatt and Doc lounging off a side street having a smoke on their gunfight break (in fact I up and asked Doc when the next O.K. Corral fight was planned - he was cute, bonus!) but if you want to see them shoot it out you're going to shell out some silver dollars. There are a few cowboy hats and boots being sported by the locals (with shorts!?) but you're just as likely to see a biker on the bar stool next to you at The Crystal Palace and Big Nose Kate's as a grisly cowpoke.
Thankfully both The Crystal Palace and Big Nose Kate's were pretty much as I remember them, except for the big screen TVs all playing, yeah, you guessed it, Tombstone the Movie. WTH? I guess we needed to be reminded where we were?
Big Nose Kate's is pretty much the same as I remember, crowded, a few of those grisly cowboys seated and standing around (chatting with the bikers), rowdy, crammed with dusty western brik-a-brac but there was a singer doing top ten hits, adding to the din and making a conversation pretty much impossible. 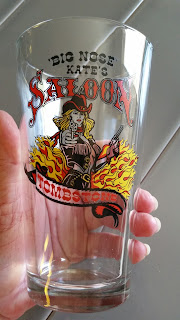 Kate's is now serving up their own branded pilsner in souvenir pint glasses which I wanted to try. But there's no big nose on that pint glass Kate, famous bar saloon singer and girlfriend of Doc Holiday, just a modern day blond cowgirl holding a six-shooter. Another blow to history since Kate was a songbird not a gunslinger, but the pilsner was good.

I don't know if the Harley Davidson shop had anything to do with it but, as mentioned before, there's quite a few bikers hanging about. Not a negative for me as I'm an ex-biker myself and both Melodieann and Derle ride. In fact, if I lived closer, I'd feel right at home in the new Tombstone for a local happy hour and beyond hangout, but it's not a bit historical. Two of the bikers kindly gave up their table for us to sit down and have a burger, the most friendly act we encountered the whole day. (Thanks, guys!) But where did all the cowboy go?? 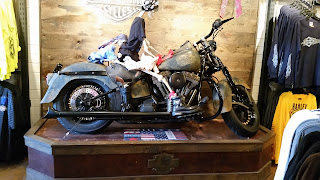 As for The Crystal Palace, thank heavens, it's still the great bar and restaurant I remember, no Faro or gambling of course, but "STILL SERVING GOOD WHISKEY & TOLERABLE WATER", and pretty decent burgers and food. And the barmaids are in period garb, boobage and all.  This was where I  spied the promotional tablecards for the Not Your Father's Beer and, eschewing my planned order of a shot of some local "Red Eye", I  ordered a bottle. 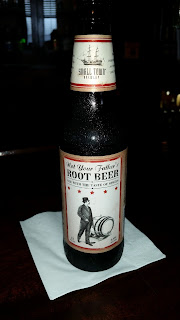 Yes, it did taste like root beer and at the back you got the ale. The first couple of sips were pretty good. Then, slowly the sweet began to become too much, even for me and I didn't finish the bottle. Derle barely touched his (sorry D), and Melodieann quit a bit before I did. It was not badly priced, even in a tourist town, $13 plus tip for three bottles and I'm glad I tried it. But no six packs of this particular craft beer will be taking up space in my home bar.

Despite the controlled attempts to extract as much dinero from the tourists as possible, we did have a good time in Tombstone. Mostly thanks to The Crystal Palace and Big Nose Kate's, a couple of beers, some friendly bikers and our own good humor. But if you're heading to Tombstone for a glimpse of the Old West and some history be prepared to pay dearly for the privilege or just skip the tourist ideas and have a decent burger and a drink at The Crystal Palace or Big Nose Kate's, the only bits of Tombstone that seem to be still standing, then head on south to Bisbee.

Tombstone may be "The Town Too Tough To Die" but it does seem to have done a disappearing act.
ADDENDUM: One really great thing about our visit, nearly every other shop on Allen Street had a bowl or a bucket out filled with fresh water for the dogs! It was a wonderful thing to see and told me a lot about the people who live in Tombstone and their attitude towards the pets of guests. I thank each and every one of them for their kindness and consideration in this matter, even though I did not have Pixel with me I know she is welcome in Tombstone
And one more thing, I may not have been happy as a tourist BUT I could really be extremely happy living in Tombstone. If you get off Allen Street you will see a truly quaint, neat and adorable small town of really great, historic and period homes. I suspect that the people are wonderful to have as neighbors as well.