HOT? CHILL OUT WITH A FROZEN COCKTAIL MARTINI GRANITA 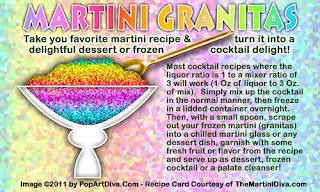 MARTINI GRANITAS
Chill Out with a Martini
You Can Eat With a Spoon!
I made a huge blender of my Cherries Jubilee Martinis last week and actually had some left over.  I don't ever waste a cocktail so I simply poured it into a baggie and popped it in the freezer. When I had broken my blender once a few years ago this is exactly what I did to make some frozen daiquiris!  I simply mixed my cocktail as usual but then froze it in a baggie.  When it was nearly frozen I simply smashed the bag around in my hands until it was slushy enough to pour!
Pure alcohol doesn't freeze in a home fridge but, if you have enough mixer in it, you can get it to solidify, the more mixer to alcohol ratio the harder your cocktail will freeze. (Check out how I did my Martini Popsicles). When I took the frozen martini mixture out it was actually solid enough I had to scrape it out and this is exactly what you do when you make any granita!  So I scraped it right into a cool martini glass, stuck a spoon in it and - Ta Da! - a delicious frozen cocktail that was a perfect happy hour refreshment in the triple digit heat! 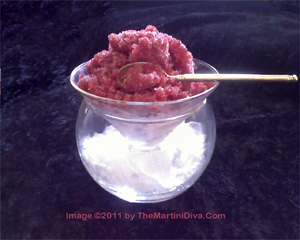 What's a Granita?
It's a grainy ice with intense flavoring that is served as a palate cleanser between courses or as a dessert.  It contains no cream or egg whites so it's not an ice cream or a sorbet.  Think of it as a snow cone or shave ice but with much more intense flavor as the "ice" is created from the flavor elements instead of a syrup being poured over ice.
Get the FREE 5x3 Recipe Card in Print Quality for Martini Granitas HERE
or
Get it on a MAILABLE POSTCARD You Can Save, Send & Share!