Today's cocktail is a delicious raspberry and orange martini that will satisfy any high maintenance rich diva.

The RCH BTCH Martini is one of my stand by favorites. It was one of my very first designer martini recipes, I had one of these before I even tried an Apple Martini. I developed this before I had gotten my first order of edible gold or, trust me, I would included the gold flakes as garnish for this one, so feel free to bring it up with some edible gold.

I love the flavor combination of the Chambord (raspberry liqueur) and Grand Marnier but without the soda these two liqueurs and orange juice are a bit too sweet so don't forget it! I have been known to cut them with an ounce of raspberry vodka instead but only when I'm having one single martini - that addition really kicks up the danger level!

Posted by Pop Art Diva Enterprises at 7:01 AM

It's summer and everyone else is doing it and so why can't I? What am I talking about? Repeats! Yes, I am going to re post the recipe cards from some of my very first martinis on this blog starting with this fun apple cinnamon martini that gets its bling from real gold!

The Millionaire Martini is a top request when I have guests and a favorite download here. I think people love the idea of the edible gold flakes that float in the Goldschlager and the extra ones in the rimmer. It's also a fun recipe card that everyone tells me people love when they do parties.

So, enjoy and throw yourself a Money Party - you can get fun money gear here to add some Pop to your Money Party: 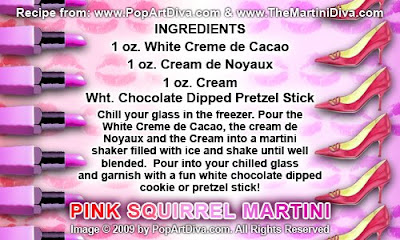 Today's is the last Pink Martini for Think Pink and it's a classic - The Pink Squirrel Martini. Based on the classic Pink Squirrel Cocktail. The Creme de Noyaux is an almond flavored liqueur made from apricot pits very much like Amaretto so if you have a hard time finding the Noyaux you can try Amaretto but it's not the same pink color!!

Thanks for joining me for my Think Pink for the Cure campaign - but don't stop thinking or drinking pink - let's keep up the push to find a cure for breast cancer! The Pink Diva Martini is really a pink version of a lemon drop martini - with the citrus vodka and the fresh lemon juice it's only pink because of the splash of grenadine. 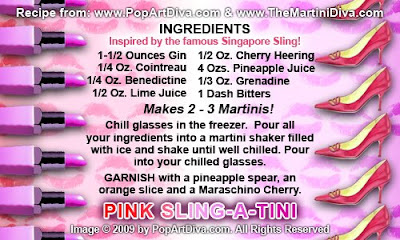 The Pink Sling-a-Tini is my take on the Singapore Sling that was created by Ngiam Tong Boon at the Long Bar of the Raffles Hotel in Singapore. Originally called the Straits Sling or possibly derived from it this was a popular drink during the 1920s and then again in the 1950s.

This is a very sweet "girly" drink but don't be taken in by it's pink color and the sweetness - this one packs a serious punch! 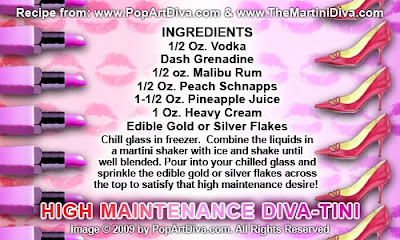 This one if for all you "Rch Btches" out there - it's very high maintenance diva martini because the garnish is edible gold or silver! My dear divas, not only can you drip in gold on your pampered body but you can now decorate your insides with it too, lol.

Posted by Pop Art Diva Enterprises at 6:44 AM 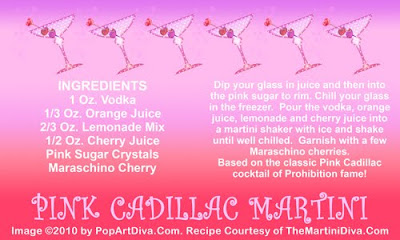 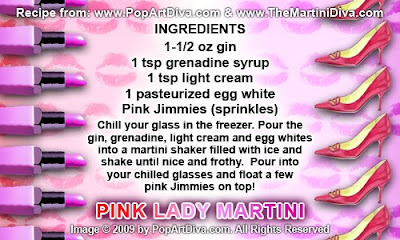 It's PINK WEEK in PopArtDiva Land.
Let's Find a Cure for Breast Cancer - Throw a Pink Party, Wear Pink, Think Pink!
Are you having a Pink Party? Why not? It's a great way to get your Diva on and support your favorite breast cancer charity!

To throw a Pink Party it's kind of important to have a pink theme, right? So, all this week I am posting nothing but PINK MARTINIS here at The Martini Diva. To start the week off right I'm posting a classic cocktail called a Pink Lady in Martini attire!

It's Pink, it's Powerful, it's Pretty - just like a Diva! It goes great with all the pink foods I'll be posting at The Diva of Tiny Foods all week too! 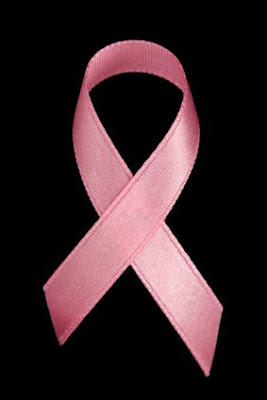 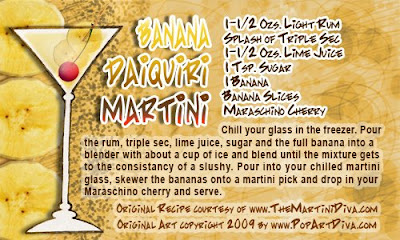 If you like bananas this Banana Daiquiri Martini should just tickle your monkey toes! Try it out with my Banana Chicken Fritters or today's banana recipe at The Diva of Tiny Foods.

Posted by Pop Art Diva Enterprises at 8:52 AM 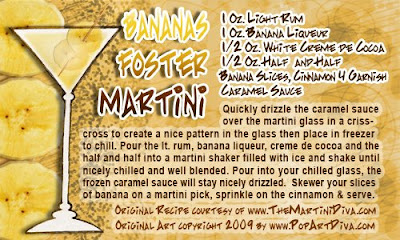 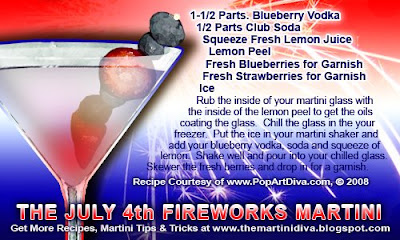 Stay safe this Fourth of July - Don't Drink and Drive or Drink and Do Fireworks!

Posted by Pop Art Diva Enterprises at 7:55 AM