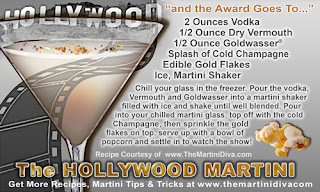 This Oscar Martini has double bling! The Goldwasser, a root and herbal liqueur, has flecks of gold floating in it and then you sprinkle some more edible gold flakes on top for a garnish.  There's even a little sparkle from the splash of Champagne so you have a perfect martini to celebrate with the winners this coming Sunday.

Created in 1598, Goldwasser was the favored drink of Catherine the Great and was believed to be an elixir with magical properties.  Surrounded with stories involving Neptune and alchemy, Goldwasser has an interesting back story which you can read about at Gdansk Life.