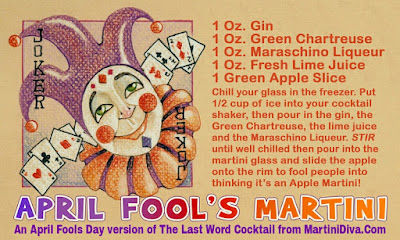 HOW TO HAVE THE
"LAST WORD"
ON APRIL FOOLS DAY.

If you're looking for a cocktail to trick your friends at Happy Hour today you've come to the right place. My April Fool's Day version of a classic Last Word Cocktail will fool them into thinking it's an Apple Martini - until they take that first sip.


The standard recipe for a Last Word is one part green chartreuse, one part in gin, one part Maraschino liqueur and one part lime juice garnished with a lemon twist or wedge. I just switched out the lemon twist for an apple slice. Mean, huh??

Set this green martini with the apple garnish in front of your drinking buddy and have your phone ready to record their first drink. They'll be expecting a sweet, apple flavored martini but they'll be pranked with an herb infused Green Chartreuse and Gin cocktail. That first sip should cause some classic funny faces for posterity and you can load it up on social media to share with your whole group the next day. Bingo, instant April Fool's cocktail joke.

Just in case, you might want to have a few real Apple Martinis on hand, but don't be surprised if they enjoy this martini after that first surprise as it's actually quite a nice cocktail. It is, however, quite a different flavor profile from the sweet apple they were expecting so you might want to back off a few feet just in case there's a few spit takes.


THE ORIGINS OF APRIL FOOL'S DAY

The true origins of the beginnings of April Fool's Day are not really known but there are a few theories of it's history. The most prominent one, and the most believable, is centered around the switch from the Julian Calendar to the Gregorian Calendar.

Prior to the late 1500's the Julian Calendar marked New Year's as March 25th, but because this date fell during a holy week, New Year's was traditionally celebrated on April 1st. When the Gregorian Calendar (aka the Western Calendar) was introduced by Pope Gregory XIII (after whom the calendar is named) by a decree signed on 24 February 1582, New Year's moved to the first of January.

Because communication was slow in those times much of the Western world was unaware of this new calendar for several years. There were also those who knew of the change but defied the Papal Bull and continued to follow the Julian Calendar, celebrating New Year's on April 1st.

According to legend these people were believed to be "fool's" by those who had adopted the Gregorian Calendar and these "fool's" were subjected to a variety of pranks and jokes, ridiculed for their "backwards" behavior. This practice continued for years as the world slowly adopted to the new calendar dates, eventually becoming so ingrained a habit it became a tradition which eventually spread throughout Europe by the 1800s and traveled across the pond to the American Colonies with English and French immigrants.


WHAT HUGE APRIL FOOL'S HOAXES DO YOU REMEMBER?
10 of the Top April Fool's Hoaxes

One April Fool's hoax that sticks in my memory is the one involving Taco Bell and the Liberty Bell: In 1996, Taco Bell took out an ad in The New York Times announcing that they had purchased the Liberty Bell to "reduce the country's debt", renaming it the "Taco Liberty Bell". White House press secretary Mike McCurry carried this April Fool's joke one step further during a press conference on the ad stating that the Lincoln Memorial had also been sold and would henceforth be known as the Lincoln Mercury Memorial.

I also remember the Left Handed Whopper from Burger King in 1998. The funny thing about that one for me was I remember thinking it was a great marketing ploy. I knew it was tongue-in-cheek but I didn't realize it was an April Fool's joke immediately because I forgot it was April Fool's that particular day. Once I stopped being my own kind of April Fool and connected the dots, I thought the campaign was even more clever!

If every fool wore a crown, we should all be kings ~ Welsh Proverb


HAPPY APRIL FOOL'S DAY
& BE ON YOUR TOES! 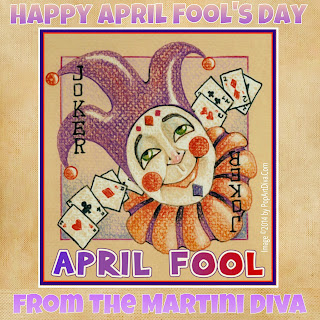 Posted by Pop Art Diva Enterprises at 7:30 AM