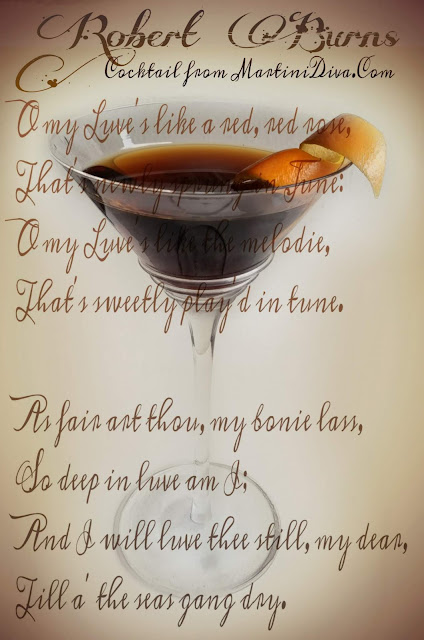 WHAT IS BURN'S NIGHT?

Burn's Night, or Robert Burns Day, Robbie (Rabbie) Burns Day or Burn's Nicht, is an annual celebration in Scotland of their most famous poet and bard, Robert Burns who was born January 25, 1759. Burns, who wrote Auld Lang Syne, is the national poet of Scotland and every year they celebrate by having a Burns Supper, serving traditional Scots food and, of course, drinking Scotch. 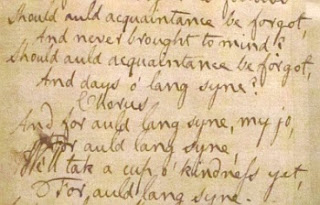 Happily there is a great cocktail called The Robert Burns (very similar to a Rob Roy) which is perfect for Burn's Night celebrations and there's also a great article by Gary "Gaz"Regan on it's provenance. In it Regan mentions several variations, one of which is David Embury's 1950s adaptation which suggests Drambuie replace the absinthe. (I checked Embury's The Fine Art of Mixing Drinks and he also lists a version using Benedictine instead of absinthe.)

Though a classic Robert Burns is Scotch whisky, sweet vermouth, absinthe and orange bitters, I rather liked the idea of the Drambuie. Drambuie is a liqueur made from Scotch whisky, honey, herbs and spices and is a warmer and less aggressive liqueur than absinthe, making this version of the drink smoother and less herbal. To complement the Drambuie, I replaced the orange bitters with Peychaud's and added an orange twist instead of lemon. 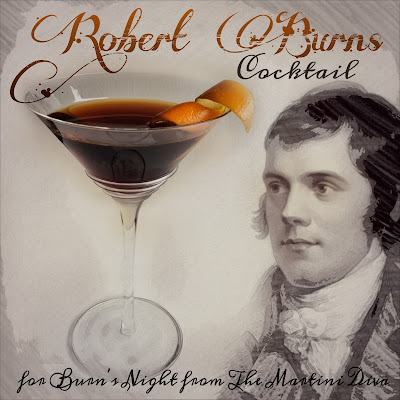 DIRECTIONS:
Stir all ingredients in a mixing glass with ice until chilled, strain into the cocktail glass, garnish and serve.

Pair up with a few Scots shortbread biscuits (cookies) and you have the perfect Burn's Night treat.
VOICEOVER VIDEO with Ingredients & Directions:
Updated 1-2022
PLEASE DRINK RESPONSIBLY
Posted by Pop Art Diva Enterprises at 4:30 AM