VALENTINE MARTINIS - TARTINI from Sex and The City 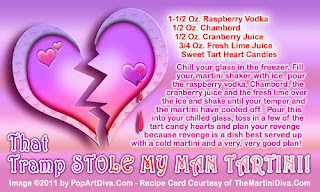 That Tramp Stole My Man
TARTINI

Today's Valentine Martini is the Tartini, a cocktail that first made it's appearance on episode 4 of season 2 of Sex and the City, "They Shoot Single People, Dont' They?"  That original recipe calls for Cranberry Vodka making the cocktail a very close approximation of a Cape Cod, however you'll find a lot of bars have replaced that with today's more popular Raspberry Vodka, which is my preferred version.


Like the episode, this martini is all about being a single woman in a couple's world and the perils therein - including the competition!

ALL MY VALENTINE MARTINIS HERE

Posted by Pop Art Diva Enterprises at 9:21 AM