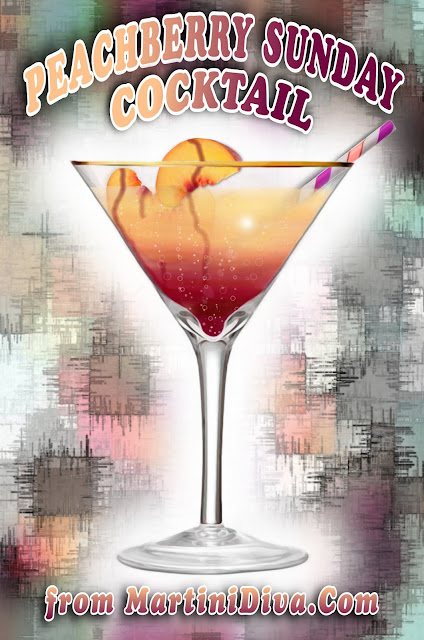 I created this cocktail originally for Ice Cream Soda Day. Admittedly, I have stretched the concept of "soda" here to include prosecco. Hey, they're both bubbly!
A classic ice cream soda consists of a scoop of ice cream (usually vanilla) and a flavored syrup topped off with soda water or unflavored carbonated water.  Here, as noted above, I have substituted some lovely, cold Prosecco for the soda, used peach ice cream instead of vanilla and replaced the flavored syrup with a flavored liqueur.  I have also added a few slices of fresh fruit to the mix, not including the garnish, though fruit pieces have never been included in a traditional ice cream soda. I'm a rebel and I see no reason to be timid when it comes to my Ice Cream Cocktails.

Reportedly invented by Robert M. Green at the Franklin Institute's semi centennial celebration in Philadelphia in 1874, the creation of the Ice Cream Soda is considered to be one of those happy accidents.  The story goes that Mr. Green ran out of cream for making his flavored sodas and he substituted ice cream instead, however, by his own admission in a trade publication in 1910, Mr. Green stated he simply, "wanted to create a new treat to attract customers away from another vendor who had a fancier, bigger soda fountain".

Others have laid claim to the creation of the Ice Cream soda as well, including Fred Sanders, Philip Mohr and George Guy, the latter was actually an employee of Green.

On an very interesting note, soda was considered a somewhat dangerous substance back in the early 20th century, so much so that it was banned for sale on Sundays.  In order to bolster the bottom line, soda fountains then started to sell "soda-less ice cream sodas", a simple treat of just the syrup and ice cream.  This is where the Ice Cream Sundae got it's name. 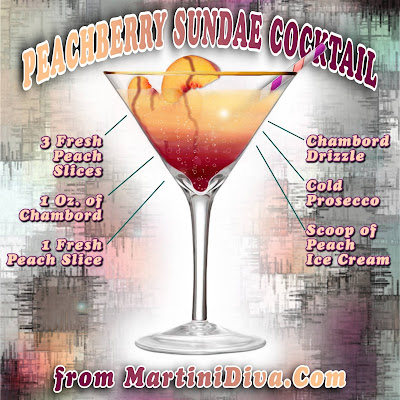 DIRECTIONS
In a chilled cocktail glass layer in a peach slice, then the scoop of peach ice cream, then the rest of the peach slices.
Drizzle on half of the raspberry liqueur then top off with the cold prosecco.
Drizzle on the remainder of the raspberry liqueur then serve with a spoon and a straw.
VOICEOVER VIDEO WITH INGREDIENTS AND DIRECTIONS:
National Ice Cream Soda Day is June 20th.
National Peach Ice Cream Day is July 17th and Raspberry Day is July 31st.