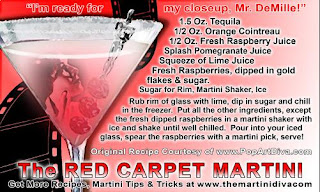 Perfect for watching all the Red Carpet shows and enjoying all the chatter about who's with who, who's wearing what and who's a possible winner, the Red Carpet Martini is a tequila based martini that deserves it's own little Oscar.