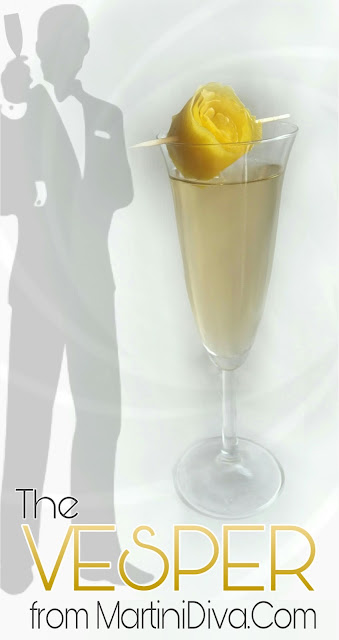 Ladies and Gentlemen, may I introduce you to the
"A dry martini,' he [Bond] said. 'One. In a deep champagne goblet.'
'Oui, monsieur.'
"Just a moment. Three measures of Gordon's, one of vodka, half a measure of Kina Lillet. Shake it very well until it's ice-cold, then add a large thin slice of lemon peel. Got it?"

There you have it. This is how it all started and I would like you to note that this is not really a martini at all (dry or otherwise) as it uses both gin and vodka and Kina Lillet, which was not vermouth, it was an aromatised, quinine infused, orange flavored wine based liqueur. To confuse matters further, KINA* Lillet is no longer available. The name was changed to Lillit Blanc and the quinine was completely removed in 1986. 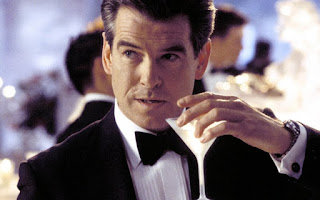 I find it interesting that Bond called out the gin and the Kina in his creation but not the vodka brand. Odd, considering how precise he is otherwise about his very personal aperitif:
"When I'm ... er ... concentrating," he explained, "I never have more than one drink before dinner. But I do like that one to be large and very strong and very cold, and very well made.  I hate small portions of anything, particularly when they taste bad. This drink's my own invention. I'm going to patent it when I think of a good name."
He eventually names the cocktail a Vesper after a female double agent, Vesper Lynd, in Casino Royale. 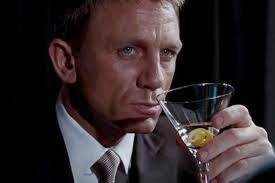 Shaken, Not Stirred?
The first appearance of that phrase appears in Fleming's novel Diamonds Are Forever (1956), but Bond himself  does not utter the words until the book Dr. No (1958) where the actual phrase is "shaken and not stirred" not "shaken, not stirred." The first time the phrase is uttered by Bond himself on film is by Sean Connery in Goldfinger (1964). In 2005 the American Film Institute listed the phrase #90 on Best Movie Quotes of the last 100 years. It's also interesting to note that a martini that it shaken and not stirred is called a Bradford. 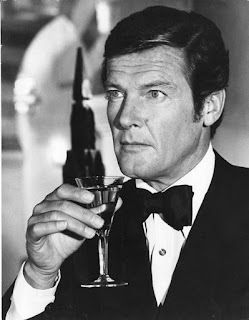 So, James Bond (Ian Fleming) created the very first designer martini way before the Cosmo or an Appletini burst upon the cocktail scene, but sadly his cocktail can no longer be made as quoted. However a close approximation can be "Shaken and Not Stirred" with a bit of clever substitution. 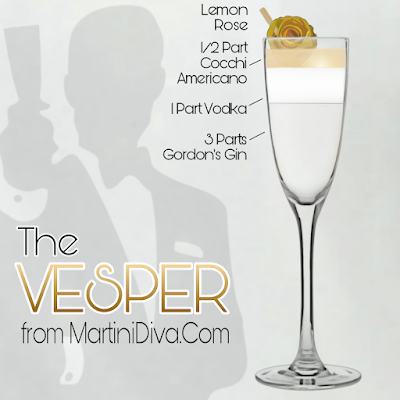 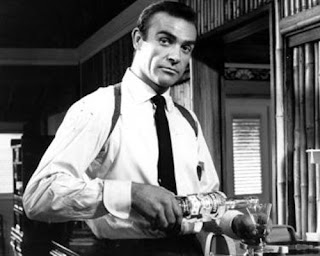 James Bond Day is celebrated every October 5th, the anniversary of the release of Dr. No in 1962. 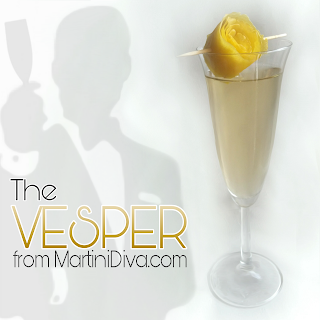