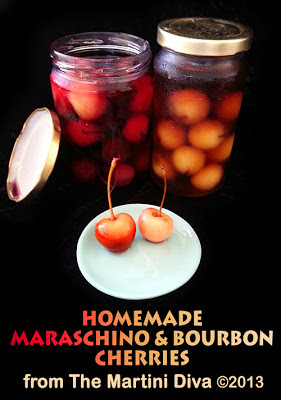 DRUNKEN CHERRIES ABOUND!
HOW TO MAKE YOUR OWN
MARASCHINO CHERRIES
or BOURBON CHERRIES

1 C.Maraschino Liqueur (or Bourbon*)
1 Pint Fresh Marasca** Cherries, Stems on Un-pitted
(Yes, I left the stems on and pits in, I'll tell you why below***)
One sterilized glass jar with a metal lid.

DIRECTIONS:
You'll notice that your cherries lose some color the longer you allow them to infuse.  If you insist on the bright red color you can add in some food coloring BUT if you prefer natural coloring, you can steep super strong hibiscus tea (I used 4 bags in 6 ounces of hot water) or reduce some beet juice and add until you get the color you like. Blanching the cherries before getting them drunk can also help preserve the bright red color.

If you're in a time crunch, the cherries do soak up quite a bit of alcohol in just a few short hours, though allowing them the full two week drunk gives them a much more mellow flavor and brings more flavors to play.


A LITTLE 411 on MARASCHINO CHERRIES:

Dalmatian aka Maraschino Cherries were popular in Europe as a sweet delicacy enjoyed by royalty and the wealthy. The Dalmatian Cherries were discovered by Americans traveling in Europe during the late 19th century and brought back home to great acclaim. During Prohibition Dalmatian Cherries were outlawed with all other things of an alcoholic nature and the chemical soaked, artificially colored cherry most of us are familiar with started popping up in cocktails as a substitute.

These preserved cherries were not created as a substitute for Dalmatian/Maraschino Cherries but as a method of preserving cherries for the marketplace prior to Prohibition. Ernest H. Wiegand, a professor at Oregon State University and mistakenly referred to as the "inventor" of Maraschino Cherries, simply developed a better brining method around 1919 that resulted in a firmer end product and his methods are still the standard used today.

**Even though the FDA held in 1940 that "maraschino cherries" are "cherries which have been dyed red, impregnated with sugar and packed in a sugar syrup flavored with oil or bitter almonds or a similar flavor", technically these are not really "maraschino" cherries as they do not employ the Marasca cherry from the Dalmatian coast of Croatia nor the Marasca cherry liqueur.  Since it's pretty hard to get ahold of real Marasca cherries,  I've used several non-Marasca varieties in mine, including Rainier and Dark-Sweet cherries (both of which I received as a Tweeter chat prize from StemLit.)

***I left the stems and the pits IN my cherries for several reasons. I wanted my stems on because when you use a Maraschino Cherry as a garnish in a cocktail it is accepted practice to leave the stem on so the drinker can easily grab it and pop it in their mouth. As for the pits, these actually impart a flavor of their own, a somewhat almond essence. In fact, the pits are often used to create a liqueur on their own. I also don't have a problem telling my free-loading cocktail guests to be careful of the cherry pits!!!

MY FAVORITE COCKTAIL USE OF
MARASCHINO CHERRIES:

Add the sugar cube to a chilled glass, tap the bitters onto the sugar cube and crush with a muddler. Add ice, pour in the whiskey, garnish with the orange slice and cocktail cherry and serve.

*Yes, you can do this with other liquors, like rum.

The very first night I made a few extra Bourbon Cherries and enjoyed them in this Not So FANCY FREE Cocktail.  After a few hours the cherries had absorbed enough of the bourbon to be feeling pretty good, if not drunken, and the color was still a beautiful red! 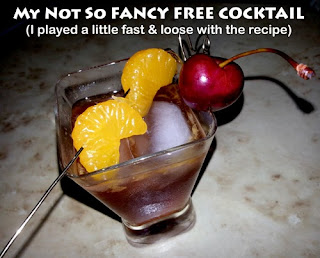