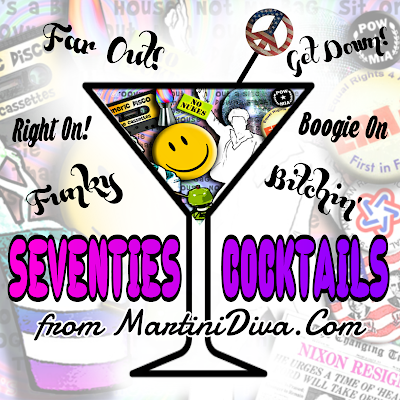 Okay, here's the deal. If you were too young to drink in the seventies then you shouldn't be writing anything about 70's cocktails. You weren't there, you don't know what most of us were drinking in the seventies or why we were drinking it. I was there, I was of drinking age, I know what people were drinking in the seventies and it wasn't drinks like Pink Ladies, Brandy Alexanders, Grasshoppers, Manhattans or Rob Roys. So all you under-60 booze bloggers out there, quit saying those are 70's cocktails.Those drinks were libations of prior decades, in the days when bars were spoken of easy or were dark, burgundy boothed (primarily male) bastions* of a quiet belt or two after work.

In those olden days your friendly neighborhood bartender had all the time in the world to carry on personal conversations and to flip a fancy "girly" drink or two to placate the few female patrons who dared enter the lion's den. Before women's lib, and the influx of disco balls and fern bars, most drinks sliding across the bar were macho glasses of whiskies, draft beers or the ever powerful gin martini. When the XX chromosome invaded Hoochville the bar scene DNA was altered permanently. Instead of an escape from family life and work pressures or an XY men's club of the hale and hearty, bars became the precursors to Tinder. They were where you went to hook up because, all the sudden, that's where all the dateable women were. Yes, there was a brief invasion during prohibition and the flapper era and a few wild moments during World War II, but until the seventies a woman alone, without a male escort, was pretty much missing, sometimes even barred** from the bar scene. Then boom, in comes the bra burning, convention busting, card carrying women's movement and the mating game had moved from the ice cream social circle and into the drinking establishment. 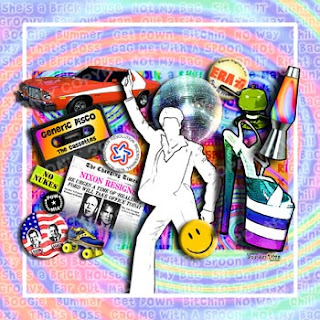 Back in the seventies, a few older people might order a dry martini, an Old Fashioned or a Pink Squirrel at their local watering hole before dinner, but those of us in our twenties were out at crowded meeting (meat market) places, dancing and partying for hours, hoping for a love connection. We were mostly unsophisticated drinkers, prone to sweet drinks, light alcohol coolers and beers that we could balance in one hand while doing the Hustle. We were circulating the crowded discos, cruising the hip, new fern bars* and drinking (and possibly taking a few hits on doobies) through the whole night. No drinks in coupes or martini glasses could withstand the Bump or being bumped in crowded discotheques and you couldn't belt down liquor only duos or guzzle sweet, booze only trios for hours (on top of, maybe, being stoned) and not end up with a raging hangover or worse, landing behind bars after not being able to touch your nose.

If you had the audacity to order something blended or complicated like the aforementioned Pink Ladies, Pink Squirrels or Grasshoppers (all popular 50s and 60s cocktails, by the way) at trendy venues that were serving tons of hot pants and bell bottom clad party animals every weekend, the so-called bartender(s) would most likely have shined you on. Not many craft cocktails were lovingly built by hand back in those days and blenders gathered dust in the back room, the bartenders were way too overworked (not to mention most were completely untrained and uninformed in the art of cocktails). The few exceptions were signature drinks served up with burgers and fries at a few eateries with liquor licenses, and those were usually premixed then sloshed into glasses just before being assaulted by a toxic cherry and tiny umbrella.

In what most cocktail historians rightly call the Dark Ages of Cocktails, we were subjected to some of the worst drinks a venue could mass produce at breakneck speed. Bottled and powdered mixes were a bartender's friend, draft beer their favorite order and a glass of rosé with a splash of soda reigned supreme. Bartenders hired for their youth and looks, not their cocktail expertise, were more interested in tips and scoring than in serving a proper cocktail. Multiple ingredient drinks, like Piña Coladas, were popular in the 70s, but those were mostly served up at in-vogue faux Tiki bars as lightweight booze icees from premixed containers, much like their fellow frozen margaritas and daiquiris were churned out at restaurant/hang-out chains like Houlihan’s from giant slurpee machines. Nobody, and I mean NOBODY, had ever heard of artisnal bitters, farm to bar or bespoke booze. It was chaos in a cocktail glass and we didn't care as long as it was palatable and didn't make us too dizzy to dance.

If you preferred a stronger libation while quietly sitting out the fray, you might be sipping a Godfather, a White Russian, a Stinger or a Rusty Nail.  Whiskies on the rocks, 7 and 7's, and gin martinis were the drinks of our parents, we wanted nothing to do with them.

If you were out to get drunk instead of getting some booty or doing the Bump you had your choice of bad to worse there as well. Shots of layered sweet liquors topped with over-proof floats, like Kamikazes or B-52s, were tossed back with abandon while gyrating to Abba. Alcoholism in a glass swills like Long Island Iced Tea were gulped down, usually as a dare, to Donna Summer. There was no booze finesse to recreational drinking or to getting drunk in the seventies. We were after all, the generation of Annie Green Springs, Boone's Farm and Coors. We also had an affinity for dangerous shoes and silly drink names like Sex On The Beach, Fuzzy Navel and that friendly surfer dude Harvey Wallbanger.

There's been a resurgence and a new interest in 70's cocktails in recent years. It's been nearly fifty years but I guess everything old is new again. Barkeeps and mixologists, myself included, are cycling back to the drinks of the disco decade, bringing a 21st century sophistication and love of quality ingredients to the mistreated drinks of the Watergate and platform shoe era. After half a century maybe it's about time we attempted to apologize to the world of cocktails for a decade of disrespect.

All that being said, were the seventies a good time for cocktails? Hell, no! Did we still have a good time? Hell, yes! We didn't know any better, we were young and the only thing we cared about was enjoying ourselves. Are cocktails better now? Hell, yes! I'm older and wrinkled, but at least I can make and get a good cocktail now. And, if I miss the old days, I'll just hang a mirrored disco ball over my bar, dig out my platform boots and pop some KC and the Sunshine Band in my cassette player. 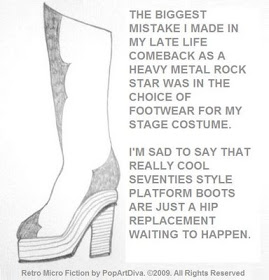 Staying Alive with the
REAL 70's COCKTAILS:
(Recipes and Updated Recipes Linked In Titles)
AMARETTO SOUR
Amaretto was big back East in the 70s, and the Sour was popular because, thanks to the sugar laden mixes used, there was nothing sour about it. If you want to experience this as a decent cocktail I've linked here to Jeff Morgenthaler's recipe.

BULLSHOT
Another East Coast seventies favorite, this was beef bouillon and vodka and a huge brunch favorite. I used the Bullshot as inspiration for my savory Thanksgiving Martini to great advantage.

GODFATHER
Scotch and Amaretto. Actually one of the few 70's cocktails I still like.
GOLDEN CADILLAC
Galliano was the one "exotic" liqueur that was embraced in the 70s, stocked primarily for Harvey Wallbangers. This fifties drink helped use up that bottle of Galliano.

GREYHOUND or SALTY DOG
With or without a salt rim, it was basically a grapefruit Screwdriver. Made with fresh juice and good vodka, it's still a worthy drink.

HARVEY WALLBANGER
Probably THE drink most associated with the era and the reason Galliano could be found in nearly every bar in the seventies.

KAMIKAZE
The deadly shot of vodka, triple sec and lime heard round the world, especially the morning after.

LEMON DROP
Maybe the original designer martini, the Lemon Drop was created in the seventies at the original fern bar, Henry Africa's* in San Francisco.

LONG ISLAND ICED TEA
Though this is a tall drink, it was a sneaky, powerful punch of basically all booze and just a splash of cola that sent many an unwary disco dancer home with a DUI. Caution is called for here.

PIÑA COLADA
Churned out from pineapple coconut mixes, cheap rum and giant blenders with spigots. Here I link to several of my own variations made with quality rums and fresh ingredients.

SCREWDRIVER
The ubiquitous bar vodka and bottled orange juice. If you must, at least squeeze out fresh o.j. and use a good vodka.

STINGER
This pre-prohibition cocktail of brandy and white creme de menthe lingered on into the seventies, probably because it was minty and sweet. It has a place as an after dinner cocktail.

TEQUILA SUNRISE
This drink was HUGE after The Rolling Stones 1972 American Tour, aka “The Cocaine and Tequila Sunrise Tour.” My version uses fresh juice, 1800 Tequila, homemade pomegranate syrup and a little kick from some fresh basil.

TOM COLLINS
A leftover from the 60s, Collins drinks were a mainstay of neophyte boozers, basically they were lemonade made with vodka and Collins mix. I did a modern take with some hibiscus tea, hibiscus and rose syrup and, as always, fresh, quality ingredients.
WINE SPRITZER
Wine and soda spritzers were the graduation cocktail for the Mateus, Lancers and Boone's Farm aficionados. Sometimes fruit juice was added to make it a Wine Cooler. My updated version uses blackberry brandy, fresh juice and a bit of bubbly instead of the soda water.

WHITE RUSSIAN
A sweet sixties drink, made with coffee flavored liqueur and "cream" over ice, probably garnered its popularity because homemade Kahlua* was a big fad in the seventies. I do remember making my own homemade Kahlua, it was the first time I ever created an infusion. I like White Russians, I like Black Russians, heck, I like all Drunk Russians.

Now, if you must ... Disco on.
But do it with better cocktails!

* Norman Hobday, owner of the famed, original seventies fern bar, Henry Africa's, likened those pre-seventies bars to cocaine dens.
** As late as the early seventies women were barred from bars in some parts of the United States!